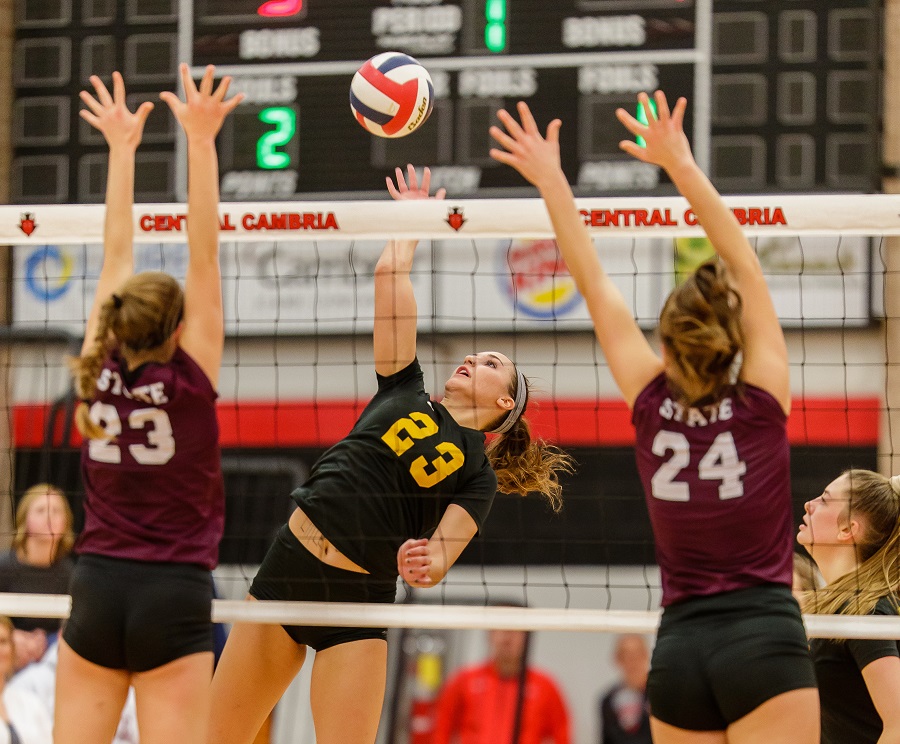 The first set was a very rare occurrence for the Lady Tigers. State College played near flawless volleyball with great serving and very good defense at the net. NA had a 17-16 lead late but State College was able to grind out a 25-23 win in the first set. Paige Miller had five kills in the set, while Anna Sprys had four. This was only the third set North Allegheny had dropped all season.

The second set was back to business as usual for the Lady Tigers. With NA up 11-10 in the set, the Tigers went on a 9-1 run to separate themselves to a 20-11 lead, ultimately winning the set, 25-15. The Lady Tigers put a lot of pressure on State College in this set which led to a lot of unforced errors.

Set number three was another tight one going back and forth. With the score 24-19, Madison Curran came up with a huge block at the net to give North Allegheny the 2-1 set lead. Curran was dominant the whole set at the net along with Paige Morningstar.

The final set was all NA jumping all over State College starting the set with a 14-2 lead. The Lady Tigers were able to coast the rest of the way and with the score 24-14 State College put a kill attempt into the net and North Allegheny was heading to the state semifinals for the second year in a row.

Sprys was the Wright Automotive Player of the game with 13 kills to go along with two aces. Paige Miller had 11 kills. Morningstar had six kills and Avery Tuman added five kills. The Lady Tigers also got great backline play from Malia Duffy and Kristen Chomos who made countless digs to keep plays alive for the Lady Tigers.

State College finishes their season with an impressive 20-1 record. North Allegheny improves to 21-0 and will advance to the PIAA Semifinals to face Garnet Valley on Tuesday at a site and time to be determined. The contest is a rematch of last year’s state semifinal and will be broadcast live by the North Allegheny Sports Network.