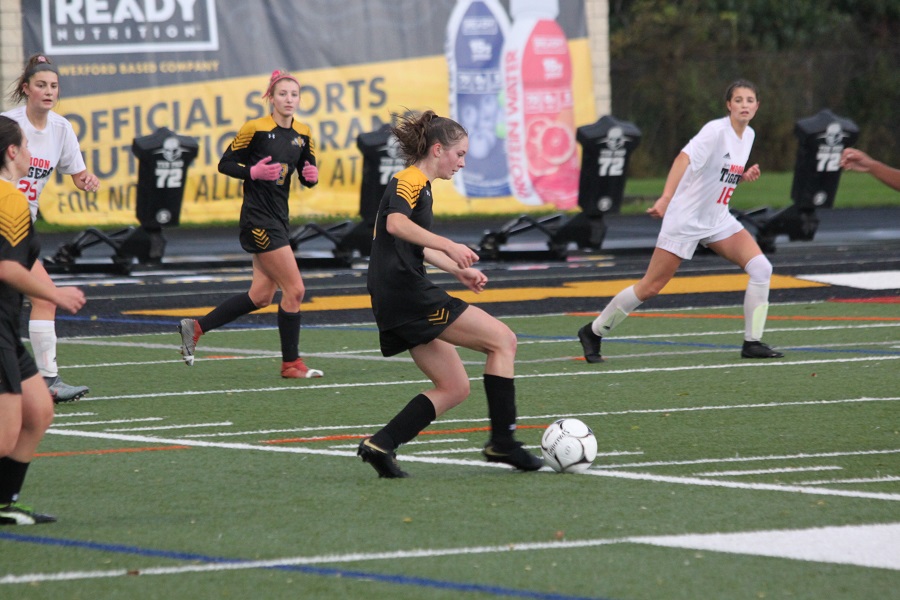 NA Shoots Down Moon In WPIAL First Round, 2-1

North Allegheny welcomed the defending back-to-back WPIAL and PIAA champions in Class AAA to Newman Stadium for a first round matchup in the WPIAL playoffs. The Class AAAA playoffs weren’t as kind to Moon, however, as North Allegheny knocked them out with a 2-1 victory. The win put North Allegheny into the quarterfinals.

Both teams were testing each other out in the early going when eight minutes into the game Moon committed a foul and gave North Allegheny a free kick from 25 yards outs. Emma Bundy took the free kick and put it into the back of the net, giving North Allegheny a 1-0 lead. After the goal, the momentum started to shift in Moon’s direction but Madison Vukas did a great job keeping them out of the net. With the first half clock running out and Moon having all of the momentum, North Allegheny got a corner kick with 37 seconds left. The pass was to Ava Ruppersberger who split two defenders and put a shot off net that deflected off of Moon keeper Madison Sleva and into the net. The goal deflated Moon and gave North Allegheny a 2-0 lead heading into the locker room.

With Moon in desperation mode all second half, North Allegheny’s back line of Caroline Noel, Riley Miara, and Natalie Mudd, along with Vukas, held Moon to two total shots on goal in the second half. With 3:06 to go in the game, Moon did draw a foul in the box and got a penalty kick. Ellie Hill took it and even though Vukas guessed right, the ball went past her finger tips and into the net to bring the score to 2-1, NA. North Allegheny held on down the stretch and won the game, 2-1, advancing to the quarterfinals.

Ruppersberger was named the Wright Automotive Player of the Game for scoring the game-winning goal. Vukas had seven saves on eight shots.

North Allegheny improves to 11-5-1 while Moon finishes their season with an 11-5-2 record. North Allegheny advances to the quarterfinals to take on second-seeded Norwin (14-2-0) on Wednesday at a site and time to be determined. Wherever and whenever that game is, it will be broadcasted on the North Allegheny Sports Network.

For a photo gallery of NA’s win over Moon, click here.