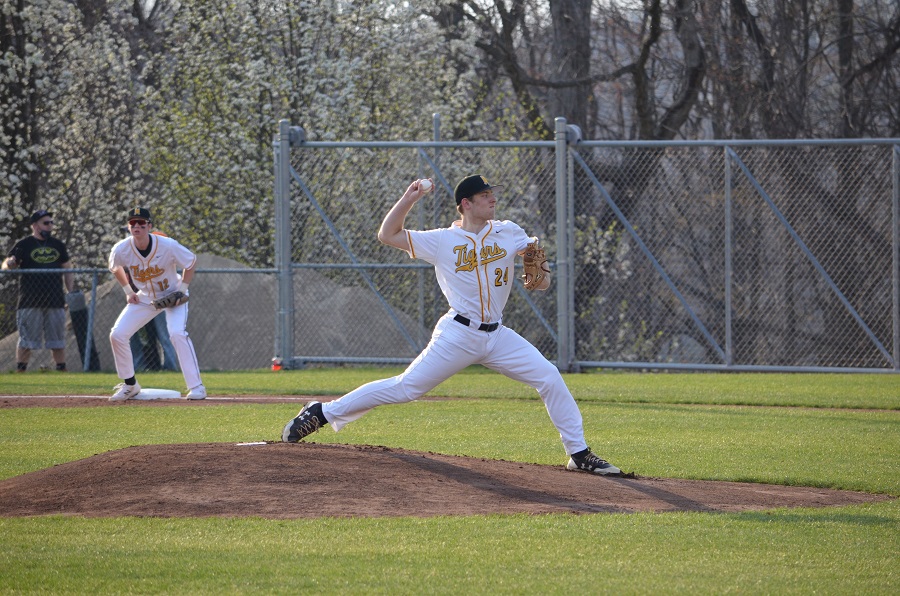 The North Allegheny baseball team earned a split in the home-and-home series with the Seneca Valley Raiders with an 11-3 triumph on Wednesday night. A day after dropping a 2-1 decision at Seneca Valley on Tuesday, NA rebounded with a convincing win. The Tigers have won 12 of their last 16 meetings in their head-to-head series with the Raiders.

An opportunistic North Allegheny lineup took advantage of an erratic Seneca Valley pitching staff that walked 10 batters, hit three more and committed two balks. The self-inflicted wounds Seneca Valley sustained began in the bottom of the second inning. A fielding error allowed NA’s Danny Gallon to score the game’s first run, and later in the frame, Aaron Posey scored on a balk by SV starter Carter Beneigh for a 2-0 lead.

In the third inning, senior Joe Manesiotis drove in a pair of runs with a single to right field, bringing home Cole Young and Gallon for a 4-0 lead.

Seneca Valley cracked the scoreboard in the top of the fourth inning courtesy of an RBI single by Ethan Baer, cutting the NA advantage to 4-1. The Tigers answered back immediately in the bottom of the fourth thanks to a sacrifice fly RBI by Ethan Gavlik, increasing the NA lead to 5-1. Once more, Seneca Valley trimmed the Tigers lead to three runs when Conor Carney clubbed an RBI double, bringing the score to 5-2, North Allegheny.

In the bottom of the fifth, North Allegheny gained a strangle hold of the game when sophomore Spencer Barnett came to the plate with the bases loaded. With nobody out in the inning, Barnett delivered a bases-clearing, three-run double to increase the NA lead to 8-2. Later in the inning, Barnett scored on a wild pitch and Erik Sundgren drove in another run on a deep double to right field and the Tigers lead swelled to 10-2.

Each team added a single run in the sixth inning, including an RBI single by NA’s Aaron Galaska, which brought the final score to 11-3, North Allegheny.

Starting pitcher Kyle Demi was impressive on the bump and went five strong innings to earn the victory. Demi permitted only two runs on four hits, while striking out eight batters and walking just two. With Demi’s dominance on the mound, and Barnett’s critical three-run double, both Demi and Barnett were named Wright Automotive Co-Players of the Game.

Following Demi in relief, Galaska pitched the final two innings and allowed only one run on two hits to close out the win.