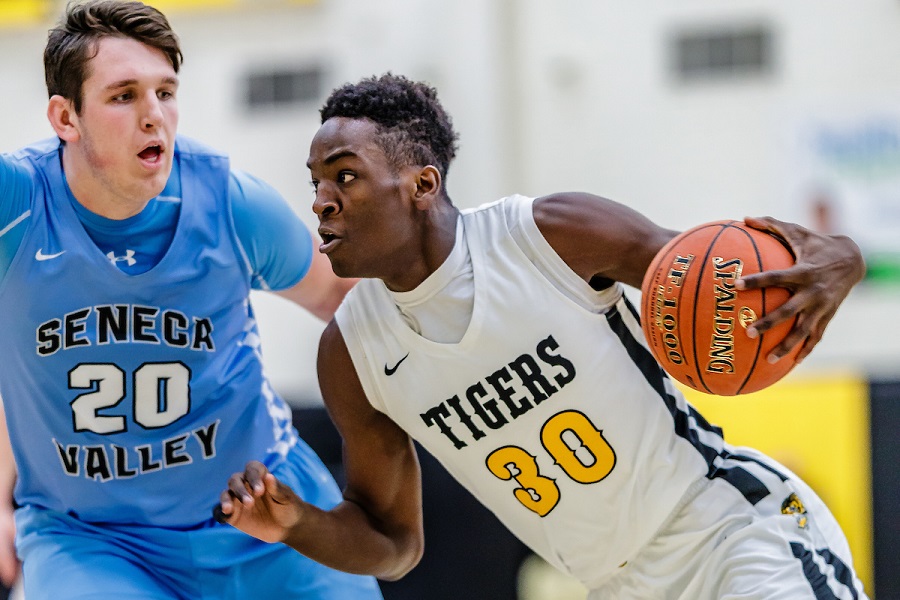 With a consistent effort on the glass and at the free-throw line, the North Allegheny Tigers won their second straight game in Section 1-6A play with a 65-47 victory over the Seneca Valley Raiders on Friday night at NASH.  The Tigers outrebounded the Raiders, 33-23, including 10 offensive boards. Sophomore Khalil Dinkins provided a team-high eight rebounds, with five offensively.

Leading a close game at the half, 23-20, North Allegheny was able to change the complexion of the contest by getting to the rim. After going the entire first half without a free throw, North Allegheny spent most of the second half at the charity stripe and poured in 25-of-31 attempts. Junior Justin Altmeyer, who also reeled in seven rebounds, connected on 8 of 9 free throws for a 10-point night.

Another catalyst in the victory was senior guard Mike Egnaczyk, who scored a team-high 15 points and was the primary defender against Seneca Valley leading scorer, Mason Bush. For his all-around play, Egnaczyk was selected as the Wright Automotive Player of the Game by the North Allegheny Sports Network.

The game was a homecoming of sorts for former North Allegheny point guard Kevin Trost (Class of 1992), who is in his first season as the head coach at Seneca Valley. The Tigers proved to be unwelcome hosts and have now won 21 of their last 22 games against the Raiders.