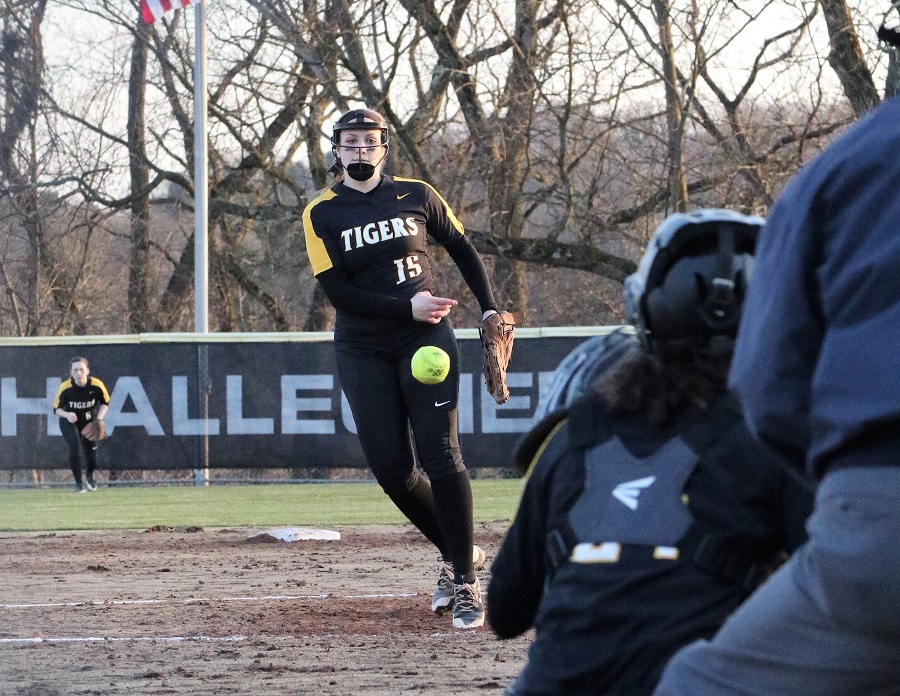 Junior pitcher Ashley Adams tossed a complete game and drove in a pair of runs offensively to lift North Allegheny to a 3-1 triumph over the Seneca Valley Raiders on Wednesday night in Section 3-6A action. In the pitcher’s circle, Adams scattered four hits and allowed only one unearned run, striking out six batters while walking just one. For her efforts, Adams was named the Wright Automotive Player of the Game.

Slippery Rock recruit Claire Zimmerman got the starting nod for Seneca Valley, and knowing runs would be at a premium, the Tigers struck first in the second inning to take the early lead. Kristen Chomos led off the inning with a single and moved to second on a Seneca Valley throwing error. Chloe Szczepaniak followed with a single to advance Chomos to third base. Chomos scored moments later on an RBI single by Adams for a 1-0 lead.

The Raiders tied the game at 1-1 in the top of the third inning courtesy of an RBI groundout by Mandi Magill that scored Morgan Aloi from third base.

North Allegheny immediately responded in the bottom of the third when Anna Pilotta laced the first pitch of the inning to deep left for a leadoff double. Brooke Serbin’s sacrifice bunt advanced Pilotta to third base and Regan Brodine reached on a fielder’s choice to put runners at the corners. Chomos followed with a walk to load the bases and Szczepaniak drew a free pass as well to bring home Pilotta for a 2-1 lead. With the bases still load, Adams delivered another RBI single that scored Brodine and the Tigers held a 3-1 advantage.

From that point on, the game became a pitcher’s duel with both hurlers allowing only one more hit for the rest of the contest. Adams retired 14 of the last 15 batters she faced while Zimmerman set aside nine consecutive batters to finish her outing. Zimmerman was saddled with the loss and allowed three runs on seven hits with four strikeouts and two walks.

Along with Adams’ pitching, the North Allegheny defense made several spectacular plays to limit Seneca Valley. Pilotta made a terrific running catch down the left field line to deny Maura Pasquale in the third inning. Centerfielder Shannon Hamm made a fully-extended diving catch in the left-centerfield gap to prevent extra bases for Olivia Madey in the fourth inning.

North Allegheny vaults to 3-1 overall and 2-0 in Section 3-6A. Seneca Valley dips to 2-3 overall and 1-2 in the section. The Tigers will host Butler on Thursday night in another section contest. Start time is slated for 6:00 p.m.