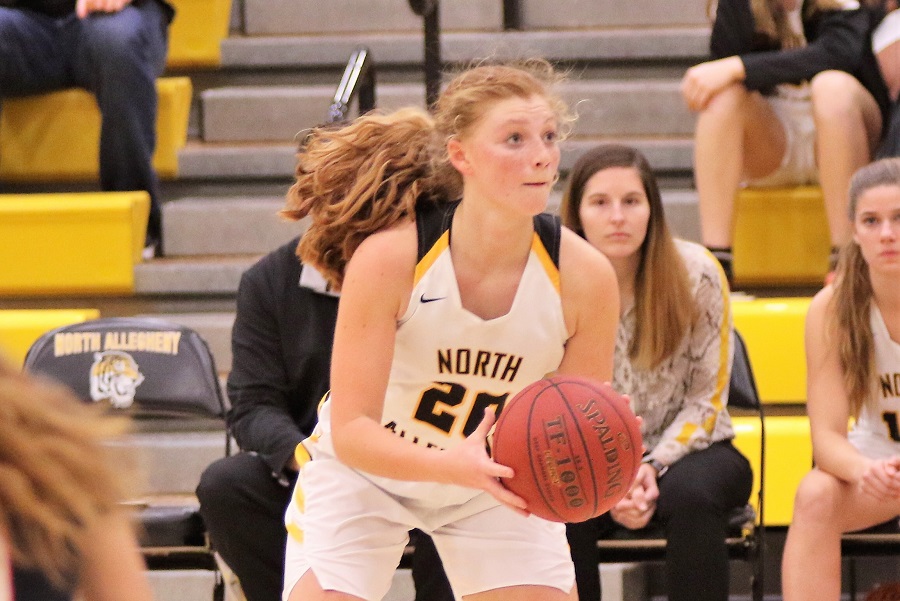 In their Section 1-6A opener, the North Allegheny Tigers defeated the Shaler Titans on Friday night, 64-36. Four players touched double figures in scoring for the Tigers, including junior Lizzy Groetsch who led all scorers with 13 points.

Of Groetsch’s point total, the junior forward slashed her way to 11 points in the first half to help NA take command. With North Allegheny up 20-14 early in the second quarter, the Tigers used a 15-2 run to seize control and owned a 35-16 lead at intermission. Along with Groetsch, freshman Jasmine Timmerson had a big first half with 10 of her 12 points coming in the first 16 minutes. In an all-around performance with terrific defense and passing, Timmerson was named the Wright Automotive Player of the Game.

In the second half, the Tigers buried the Titans with their perimeter shooting to finish off a 64-36 win. Sophomore Emma Fischer poured in four 3-pointers, including three in the second half, for a 12-point performance. Senior Abby Glass connected on three treys for nine points as well. Steady in the post and at the free-throw line, senior forward Kat Balouris totaled 10 points.

For Shaler, senior Emily Cavacini was the only player in double figures with a team-high 12 points and two 3-pointers.

With the win, North Allegheny improves to 3-0 overall and 1-0 in Section 1-6A. Shaler slips to 2-2 overall and 0-1 in the section. The Tigers will visit Seneca Valley on Monday night in another section contest.