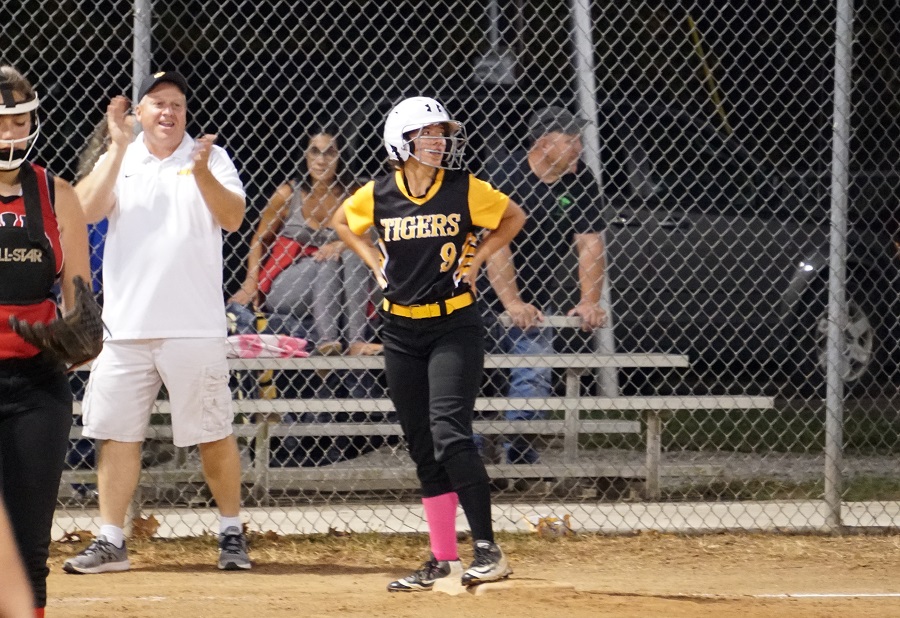 After a couple of rough weeks, North Allegheny showed their stripes again on Wednesday night with an 18-8 blowout win over West Allegheny.

At the top of the first inning, Lizzie Wetmore (sophomore) brought in an RBI with a double hit over the outfielder’s head in left center.  This was followed quickly by a Kenna White (senior) single, bringing in the other run of the inning for a 2-0 lead.  On defense, NA allowed three runs but Wetmore at shortstop earned two outs stopping grounders and making the out at second.  Pitcher Evie Wiethorn (sophomore) struck out the final batter of the inning. The Tigers trailed 3-2 after one inning.

In the second inning, no runs were scored by the Tigers, while West Allegheny scored one unearned run making the score 4-2, Indians.  Megan Quinlan (sophomore) snagged two flyouts in right field and Wetmore snagged one more at short to end the inning.

The bats came back to life for NA at the top of the third.  Nikki Crean (sophomore) and Quinlan both earned singles and were sent home when Abby Birch (senior) hit a triple with a long line drive to right field.  This was followed by another RBI after a flyout by Wetmore for a 5-4 North Allegheny lead.

During the bottom of the third, NA let two more runs in, but Birch shined for NA defensively in right center.  First, she hustled to catch a low line drive, making a dramatic out.  This was then followed by her snagging a hard-hit grounder up the middle and rocketing the ball to Wetmore at short for an out.  Birch’s defensive gems was just the kind of effort the Tigers needed, despite trailing 6-5.

At the top of the fourth, NA didn’t earn any runs but they also kept West A from scoring at the bottom of the inning with Birch hauling in another flyout in right center followed by a terrific double play to end the inning. Madison Klinefelter (junior) ran deep into left center and jumped high to catch a fly ball.  She then threw the ball to the cutoff, Wetmore, who turned and nailed a perfect throw to White at third for the tagout.  The score remained 6-5, West Allegheny.

In the top of the fifth, Quinlan and Birch both earned singles.  Although Wetmore was out on a caught fly, it was hit just far enough to bring in an RBI, now tying up the game at 6-6.  NA’s defense was strong in the bottom of the inning.  Wiethorn stopped a grounder, tossing it to Katie Marangoni (junior) at first for the out.  Klinefelter snagged an additional out in left center which was followed by White rushing a grounder and tossing it to Crean at second for the final out.  The score was 6-6 heading into the sixth inning.

Up to bat, the Tigers couldn’t gather any momentum, but they once again proved to be a defensive wall.  Weithorn, again, stopped a grounder, getting the out at first with Marangoni.  Quinlan caught another flyout in right, and Crean stopped a hard-hit ball and made the out at second with Wetmore.

Although at the start of the seventh the score was tied, this didn’t last for long.  After a couple walks and a single by Birch, White brought in a run, putting NA in the lead, 7-6.  This was followed by a long line drive hit down the third base line by Marangoni, which brought in two more runs for a 9-6 advantage.  Then, Klinefelter came up to bat and hit a powerful triple, clearing the bases and swelling the lead to 12-6. Audrey Laswell (sophomore) followed by hitting a fly which got caught in left center.  It was just far enough out there to send Klinefelter home, sliding under a tag attempt on a play at the plate. Next up at bat, Claire Medic hit a single, which was then followed by a double by Meg Patterson (junior).  Up next, Crean cleared the bases with a beautiful triple hit to right center for a 17-6 lead.  The final RBI of the inning went to Quinlan with an RBI single and an 18-6 NA advantage.

In the bottom of the seventh, two runs snuck in by West Allegheny but the Indians weren’t able too get far.  Wetmore stopped a tough grounder and sent it to Marangoni at first for the famous “Katie-Lizzie Combo” and earned the first out of the inning.  This was then followed by Klinefelter grabbing a grounder at left center and wailing the ball to White at third for the second out.  The final out of the game was from Wiethorn at pitcher stopping a hard-hit ball on the bounce and then tossing it to Marangoni at first.

North Allegheny improves to 5-5 on the season and will host Bethel Park on Sunday at 1:00 p.m.