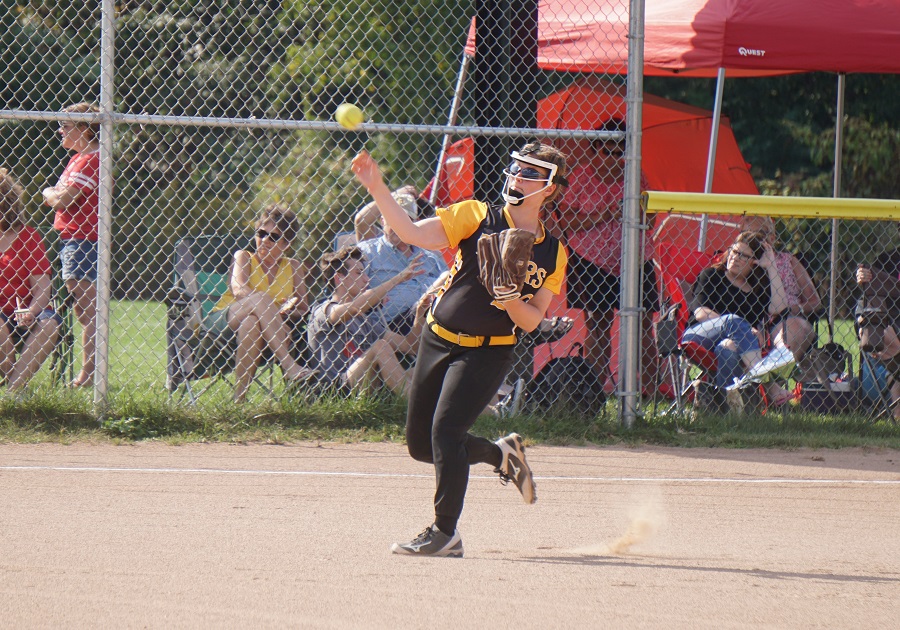 In the first round of playoffs, the NA Tigers faced off against the Mt. Pleasant Vikings on Saturday morning.  Mt. Pleasant started off strong, surprising the Tigers and earning four runs. NA stopped their momentum with a beautiful double play made by shortstop Lizzie Wetmore (Junior) to first baseman, Katie Marangoni (Junior).  Up at bat, NA pounded the ball, eventually earning seventeen runs by the end of the first inning.  Megan Quinlan (Sophomore) and Kenna White (Senior) each hit home runs, and Wetmore hit a triple.  Doubles were earned by Evie Weithorn (Sophomore) and Madison Klinefelter (Sophomore). On the second time through the line-up, White earned a triple.

In the second inning, Mt. Pleasant was held at four, but back up at bat,  Carly Snyder (Junior) earned an additional RBI with a triple for the Tigers..

During the third inning, the Vikings had a lucky streak, adding in three more runs, but Wetmore at shortstop put an end to that, making all three outs with a caught line drive and two grounders stopped and tossed to Marangoni at first for the “Katie-Lizzie Combo”.  In the bottom of the third, Abby Birch (Senior) earned a triple and an RBI.  White and Klinefelter brought in a run each, now bringing the score to 23-7, heading into the fourth.

No runs were scored by either team in the fourth inning.  At the top of the fifth, NA was able to hold the Vikings. The final out of the game was made by Nikki Crean (Sophomore) at second with a flyout on the run.

The final score was 23-7.  Now, the Tigers would have to face-off against the North Hills Indians in round two of the playoffs.

North Allegheny took on North Hills in the quarterfinals.  Up to bat first, Evie Weithorn earned one RBI with a single, but it was just enough momentum to give the Tigers some confidence heading out onto the field.  The very first hit was tough line drive up the middle caught by Emily Yanchak (Sophomore) at pitcher.  Wetmore made the next two outs at shortstop, catching a fly out in the grass, and stopping a grounder, making the out at second herself.  North Hills earned one run this inning.

In the top of the second, Claire Medic (Junior) hit a double, adding another two runs for the Tigers.  On defense, Wetmore made two more outs from shortstop to first with Marangoni and caught a line drive.  NA was still leading 3-1.

Klinefelter, up to bat, earned one more RBI for the Tigers at the top of the third, but unfortunately, the powerful hitting of North Hills was back this inning.  They ended up earning ten runs with every batter hitting right in the holes. Eventually, Birch and White each made a flyout. White also stopped a grounder, rocketing the ball to Marangoni at first.  North Hills was now up, 11-4.

NA was held at that top of the fourth, but North Hills continued killing the ball, gaining another four runs.  Quinlan made an out at second, and Klinefelter caught two flies in left center.

At the top of the fifth, NA was back at the top of their batting order, but could not get on base again.  The Indians earned two more runs before Marangoni, Klinefelter, and Wetmore each made an out.

Heading into the sixth inning, the Tigers had to earn a few more runs to stay in it, but it wasn’t in the cards.  Kept at four runs, NA had to keep North Hills from scoring, which they weren’t able to do. With the bases loaded, Birch caught the last fly of the game and threw that ball home to stop the Indians from scoring. In the end, it wasn’t enough as the Tigers fell to the Indians, 19-4.

The North Allegheny Slow-Pitch Varsity team is sad to lose their two seniors, Abby Birch and Kenna White.  Birch and White will be terribly missed. Congratulations to the entire NA team and coaching staff for a terrific 2019 season.