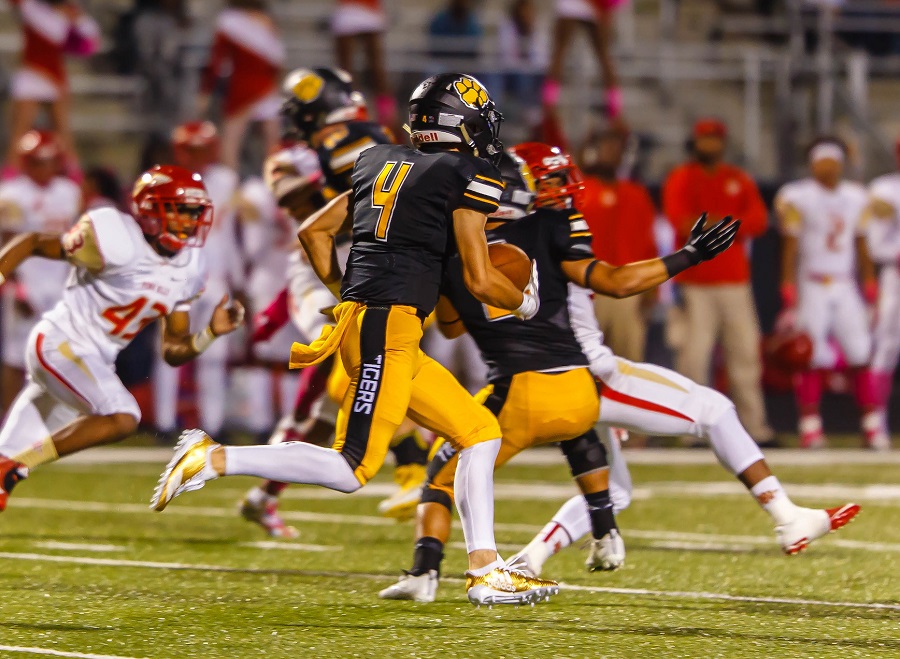 In a game that featured North Allegheny’s No. 1-ranked offense and Seneca Valley’s No. 1-ranked defense, it was the Tigers defense that came up big time after time and led them to a 10-6 win on Friday night at Newman Stadium.

After a North Allegheny three-and-out, it looked like Seneca Valley was knocking on the door again. The Raiders attempted a 37-yard field goal but the Tigers made their first splash play of the game by blocking the Seth Winters field-goal attempt, keeping the score at 6-0.

North Allegheny finally got their offense going in the second quarter. The Tigers first scoring drive was set up by a Luke Colella 41-yard run to the Seneca Valley 10-yard line. North Allegheny wasn’t able to put the ball in the end zone but kicker Isaac West finished the drive with a 20-yard field goal, cutting Seneca Valley’s lead to 6-3 with 6:52 to play in the half.

After the defense got a stop, it was Luke Colella once again setting up a scoring drive for the Tigers by catching a 41-yard pass from Ben Petschke to put the ball 1st and goal on the 3-yard line. It was little brother setting up big brother when Joey Colella finished the drive on a 1-yard QB sneak, giving the Tigers their first lead of the day, 10-6, with 1:47 to play before halftime.

The second half was a defensive slugfest. With under a minute to go in the third quarter, senior Corey Melzer intercepted a pass to give the Tigers prime starting position in the red zone. It was Melzer’s team-leading fourth interception of the year. The Tigers ultimately turned the ball back over, however, and weren’t able to add on to their lead.

Seneca Valley forced four turnovers in the game, the fourth of which came on an interception by Conor Hayes, which he returned it to the NA 27-yard line midway through the fourth quarter. On the very next play, Seneca Valley attempted half-back pass by Matt Stanger. Senior Joey Porter Jr. was not fooled by the gadget play and came down with his second interception of the season to deny the Raiders.

The final nail in the coffin came with 2:00 left in the game when North Allegheny had a 4th down and West pinned Seneca Valley inside their own 5-yard line with a perfectly placed punt, making it nearly impossible to score with the amount of time remaining. The Tiger defense held and NA won, 10-6.

Luke Colella was named the Wright Automotive Player of the Game by the North Allegheny Sports Network with 149 total yards and two huge plays that set up both of North Allegheny’s scores.

The Tigers will be back at home next Friday against Butler who is winless on the year to this point. As always, you can find that game right here on the North Allegheny Sports Network.