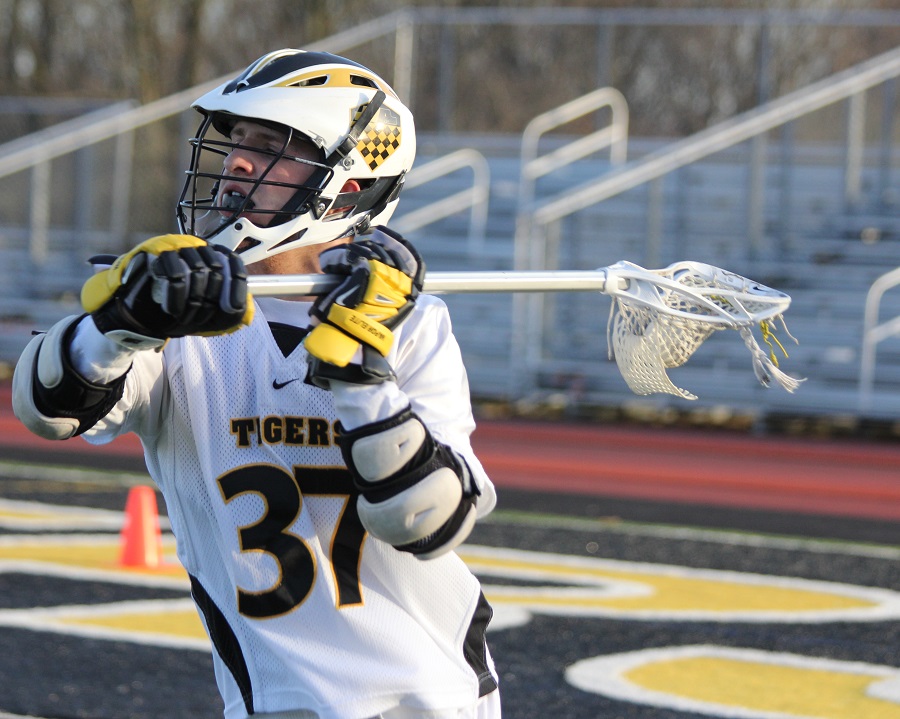 In an intense section battle at Newman Stadium, North Allegheny outlasted rival Seneca Valley by an 8-6 final on Wednesday night. Alec McGovern and Nick Koebley both notched hat tricks and goalie John Abbondanza made some terrific stops, especially in the second half, to help lead the Tigers to victory.

McGovern and Koebley tallied the first two markers of the night to ignite a dominant first quarter for the Tigers.  Running on all cylinders, Stephen Kelleher and Zech Nachazel followed with goals to increase the NA advantage to 4-0 heading into the second period.

Seneca Valley survived North Allegheny’s initial surge and began to chip away at its deficit in the second quarter.  The momentum turning goal for the Raiders came off the stick of Tanner Pfeffer in a man-up situation with one second remaining in the half to trim the score to 5-2, Tigers.

The Raiders outscored the Tigers 3-2 in the third period and pulled to within a goal with 4:55 remaining in the game on a man-up tally by Michael Zoria. It was Zoria’s third goal of the game and cut the score to 7-6, Tigers.  However, North Allegheny answered just 31 seconds later on Koebley’s third goal of the night, and 12th of the season, to provide some breathing room at 8-6. Koebley’s hat trick and clutch goal earned him Wright Automotive Player of the Game honors.

The Raiders mounted a late charge but Abbondanza thwarted SV’s desperation attempts over the final four minutes of the game to secure a North Allegheny victory. Abbondonza made nine saves, including an exceptional stop with about 45 seconds to remaining in the contest. Also contributing to the victory was faceoff man Zach Smith who won 11 of 15 draws.

The Tigers improve to 6-4 overall and 3-1 in Division 1, Section 2.  Seneca Valley drops to 3-7 overall and 1-3 in section play. North Allegheny hosts Upper St. Clair tonight at 7:00 pm in a non-section affair.