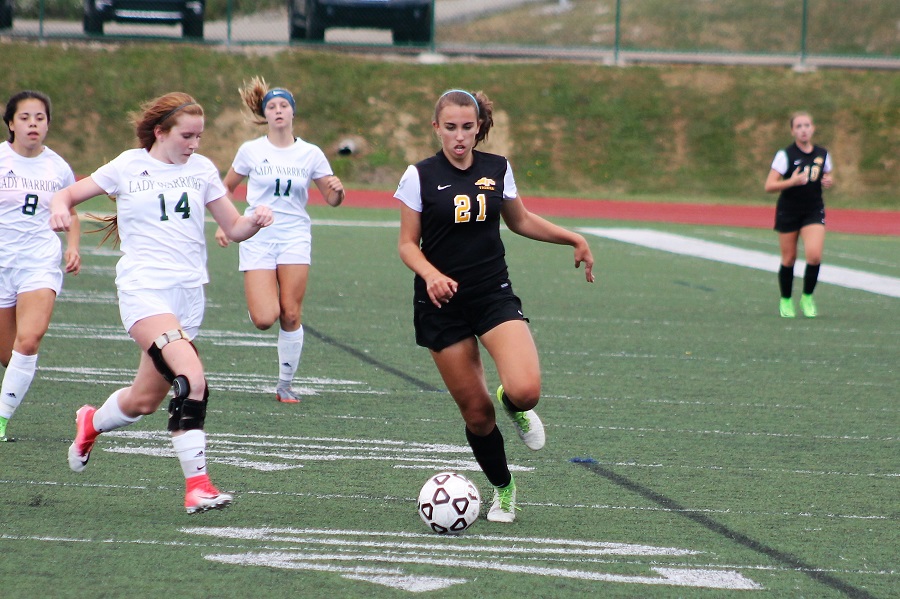 The third time was the charm for the North Allegheny girls’ soccer team on Thursday night as the Lady Tigers upended the top-seeded Pine-Richland Rams in the WPIAL quarterfinals, 2-0. The Rams were the Section 1-AAAA champions and went undefeated through section play, including a win and tie against North Allegheny along the way. However, in the WPIAL quarterfinals, the upstart Tigers knocked off their neighborhood rivals to advance to the WPIAL semifinals next week.

North Allegheny came out electric as they dominated the first 10 minutes of the game but was not able to get a shot past Pine-Richland’s freshman phenom in goal, Katharine Kelly. In the 12th minute, North Allegheny finally broke through when Ava Ruppersberger sent a great feed into the box onto Alex Adams’ foot and she buried it into the left corner to give North Allegheny a 1-0 lead with 28:41 left in the first half.

The next 10 minutes were dominated by Pine-Richland and climaxed when their leading scorer Megan Donnelly found some space in the box but was denied by first half goal keeper Olivia Ruppersberger. Things started to calm down but as time was running out in the first half the Lady Tigers tried to get one more rush and maybe put a dagger in Pine-Richland when Adams beat the defender and went 1-on-1 with Lady Rams goal keeper but Kelly got the better of Adams this time and at the half North Allegheny led 1-0 with a very impressive first half.

People weren’t even able to get into their seats for the second half before North Allegheny was already putting the pressure on Pine-Richland again as the Lady Rams lost track of forward Morgan Anderson as she uncorked a left-footed shot from about 25 yards out. The shot was saved by Kelly but she left a juicy rebound and Adams was there to clean up the trash and put it in the back of the net for her 13th of the year and 30 seconds into the second half North Allegheny led 2-0. Six minutes later, it looked like Adams had gotten her third goal of the game when she beat goal keeper Kelly but the ball rang off the crossbar and the score remained 2-0. Adams was named the Wright Automotive Player of the Game with her two goals to lead the Tigers.

Pine-Richland had a huge chance with 27:15 left in the game when Donnelly set up Allie Malobicky with a prime chance from five yards out with no defense in sight but second half goalie Julia Correa stayed calm and held her ground. Malobicky ended up shooting the high and the shutout remained intact. With Pine-Richland getting desperate and the clock ticking on their season, the Rams continued to push defenders forward but the defensive line of Caroline Wood, Hannah Kirkpatrick, Jetta Kroll and Natalie Mudd didn’t crack.

North Allegheny improves to 12-6-1 while Pine-Richland’s season ends with a 16-2-1 record. The Lady Tigers will be back in action on Monday against the No. 4 seed Norwin Knights who won their quarterfinal game against Kiski, 3-1. At one point, Norwin was ranked the top team in the country by Top Drawer Soccer. They now are now ranked 40th in the nation. The WPIAL semifinal contest between the Tigers and Knights will be broadcasted here on the North Allegheny Sports Network.