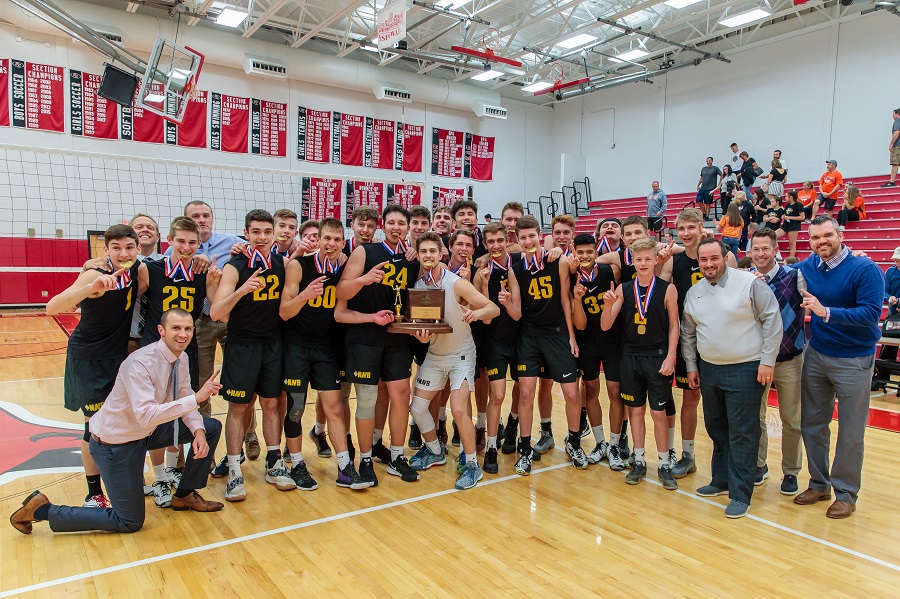 The North Allegheny boys’ volleyball team earned a WPIAL three-peat on Thursday night with a 3-0 victory over the Bethel Park Black Hawks at Fox Chapel High School. It was a rematch of last year’s WPIAL Class AAA title tilt, which ended with the same result, a North Allegheny victory. The Tigers won their 11th WPIAL crown in the last 13 years and their 20th WPIAL championship overall.

Facing the second-seeded Black Hawks, the top-seeded Tigers fell behind 16-13 in the first set before head coach Dan Schall called a time out. North Allegheny responded by scoring 12 of the next 13 points to win the first set, 25-17. Senior Alex Zubrow was a catalyst for NA with four kills and an ace, and senior Drew Hunker tallied three kills and a block.

Set two saw Bethel Park grab a 9-8 lead before NA went on a 7-0 run to take the lead for good. Bethel Park’s Max Cooley, the WPIAL Class AAA Most Valuable Player, did his best to keep the Black Hawks within striking distance with six kills. However, the well-balanced Tigers outlasted the Black Hawks for a 25-19 victory.

North Allegheny stormed out to an 8-1 lead in the third set but Bethel Park trimmed the deficit to two points several times. Leading 17-15, North Allegheny once again used a late surge to pull away for a 25-18 victory. Senior Ben Mendes notched three kills in the set and Hunker also posted three kills, including the final point of the night.

Hunker led the offensive attack with 10 kills on the evening, followed by Zubrow with nine. Zubrow also led NA at the net with six blocks. Senior Trevor Treser tallied a team-best 14 digs and senior Sava Topich totaled 11 digs. With crisp passing throughout the night, Topich also led NA with 30 assists and facilitated the offensive attack. For his efforts, Topich was named the Wright Automotive Player of the Match.

With the win, North Allegheny improves to 19-0 on the season and extends its winning streak to 42 in a row. The Tigers now look to defend their state crown with a PIAA first round matchup on Tuesday at a site and time to be determined.