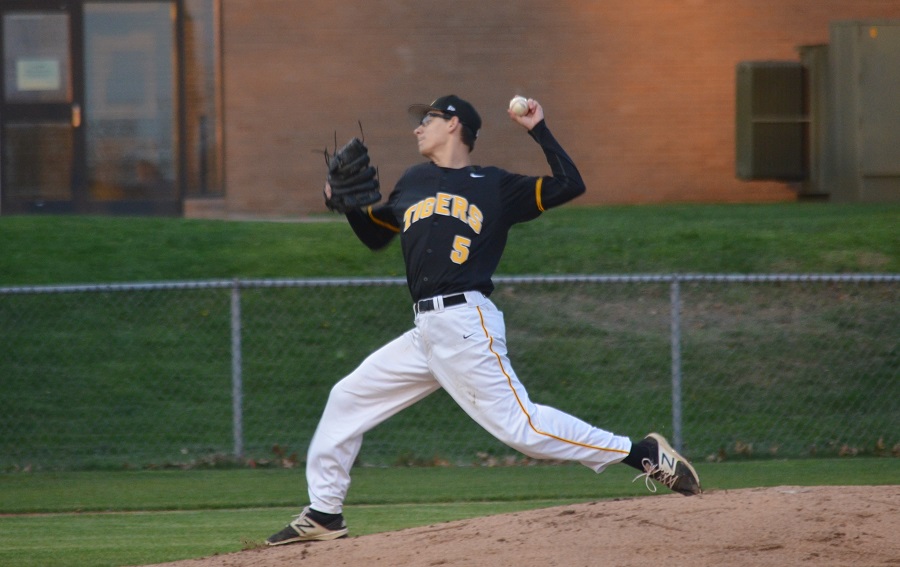 The North Allegheny baseball team earned a pair of Section 1-6A wins on Thursday evening with a 1-0 walk-off win over Shaler in 17 innings and a 5-2 triumph over Seneca Valley. The home sweep vaults the Tigers into second place in the section standings.

The first contest against Shaler was the resumption of a game that was suspended on Monday night due to lateness in the 15th inning. After two more scoreless innings upon continuation, the marathon concluded on a walk-off RBI single by Caiden Wood with two outs for a 1-0 victory in the bottom of the 17th inning.

In the nightcap, Seneca Valley opened up a 2-0 lead thanks to an RBI single by Josh McClean in the fourth inning and a North Allegheny error in the fifth. The Tigers turned the tables quickly on the visiting Raiders and batted around in the home half of the fifth.

In the bottom of the fifth, North Allegheny cut the score to 2-1 on an RBI single by Turner White and took the lead moments later on a two-run double by Luke Trueman for a 3-2 advantage. After a walk to Colin Cain, Trueman scored on a wild pitch and the NA lead swelled to 4-2. Ben Petschke followed with a single and Wood capped the inning with a sacrifice fly to score Cain for a 5-2 lead.

The three-run lead stood up as reliever Kevin Schott, who entered the game in the top of the fifth, pitched the final two innings to earn the victory. Schott worked three innings and allowed one unearned run on one hit. For his efforts, Schott was named the Wright Automotive Player of the Game.

Starter Ryan Partridge received  a no-decision for NA but was solid on the mound. Partridge kept the Tigers in the game by tossing four innings, while permitting only one run with two strikeouts and three walks. Seneca Valley’s starting hurler Jon McCullough took the loss, surrendering four runs in four innings of work.

North Allegheny improves to 8-3 overall and 4-3 in Section 1-6A with the sweep. The Tigers will host Butler on Friday night in a game that can be heard live on the North Allegheny Sports Network. First pitch is slated for 7:00 p.m.