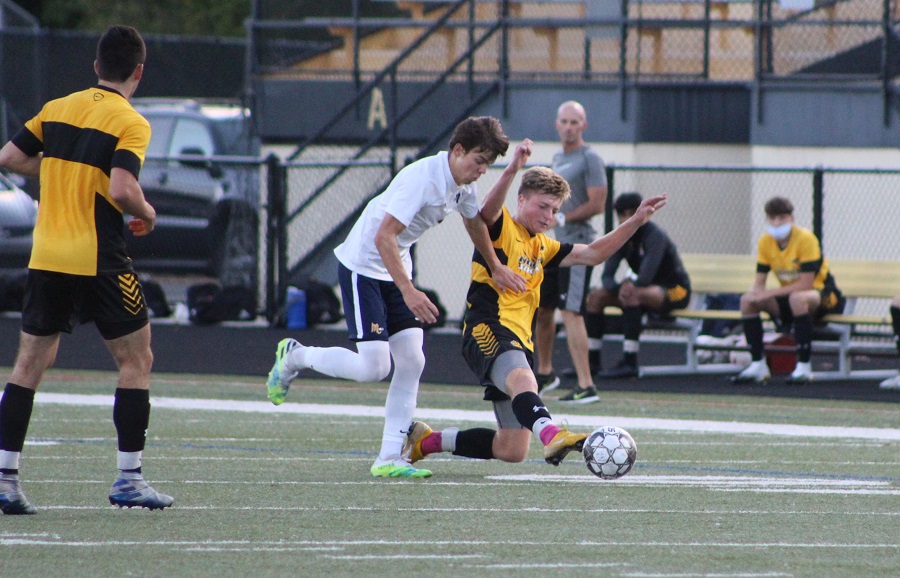 It was a playoff preview at Newman Stadium on Wednesday night as the North Allegheny boys’ soccer team faced off against its future opponent in the WPIAL first round, the Allderdice Dragons. Thanks in part to a two-goal performance from senior Jonathan Swann, the Tigers defeated the Dragons in the regular season finale, 5-2.

In the first half, Allderdice stunned NA when senior Luqman Sabree muscled his way down the right side for an open shot and a goal to give the visitors a 1-0 lead. The Dragons lead could’ve been larger if not for a great diving save by NA goalie Regan Racicot to deny Milo Larson.

With 11:34 remaining in the first half, North Allegheny junior Evan Anderson scored his team-leading 14th goal of the season and the game was tied, 1-1. Just over four minutes later, senior David Lessure netted his fourth goal of the year to propel the Tigers in front, 2-1.

The Tigers expanded the lead to 3-1 with 20:16 to play in the second half when Swann broke loose for a breakaway and beat Allderdice goalie Adrian Solano for a goal. North Allegheny controlled the pace of play for most of the second half but Allderdice’s leading scorer, Robert Phelps, was able to create some space in the NA box for a goal and the Tigers lead was cut to 3-2 with 8:53 remaining.

With Allderdice seemingly back in the game, North Allegheny answered back with 6:20 on the clock when sophomore Ben Christian came through for a steal and pass in front that was redirected into the net by Swann for his second goal of the night and a 4-2 lead. For his two-goal outing, Swann was named the Wright Automotive Player of the Game.

The Tigers capped the scoring with 2:32 left as Christian sent a long pass to senior Will Stasko who streaked past the Dragons defense and tapped a shot past Solano to bring the final score to 5-2, North Allegheny.

With the win, North Allegheny concludes the regular season with a 12-3-1 record. Allderdice dips to 5-5-1 on the year. The Tigers and Dragons will faceoff again on Tuesday night at 8:00 p.m. in the first round of the WPIAL playoffs. The game will be broadcast live via the internet on the North Allegheny Sports Network.