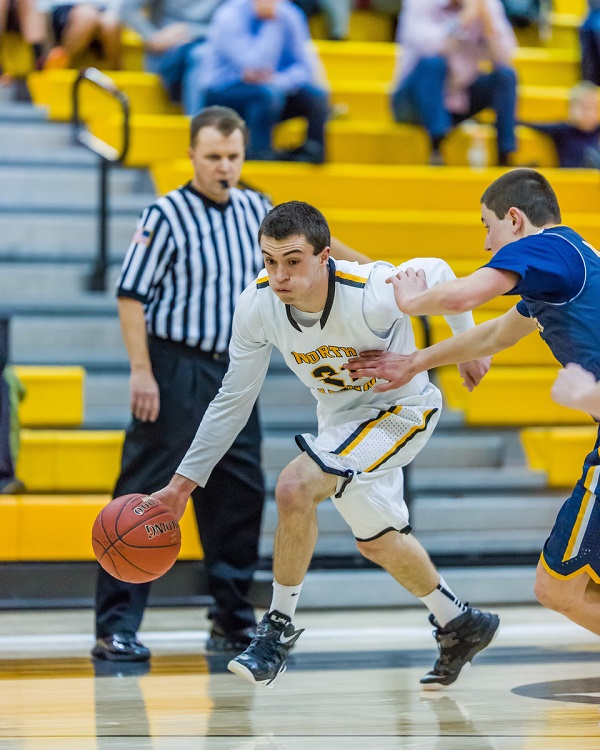 The North Allegheny boys basketball team took home the first place trophy at the Wright Automotive Holiday Tournament with an 84-76 win over McKeesport on Wednesday night. In a title tilt between two Tigers, it was North Allegheny who came out on top for the tournament crown.

McKeesport shot 52 percent in the first half and led 34-33 at intermission, spearheaded by junior Raquan Elliot who netted a team-high 21 points on 9 of 11 shooting from the field. The teams continued to trade barbs in the third quarter and were tied 40-40 until NA junior Luke Carter caught fire from beyond the arc. Carter poured in three consecutive 3-pointers to give North Allegheny a 49-40 advantage. Carter finished with 17 points and four treys on the night.

North Allegheny increased its lead to 67-54 on a Ray Sandherr layup with 7:13 remaining in the fourth quarter for the largest lead of the night. However, McKeesport staged a rally with a 13-2 run that trimmed the score to 69-67, North Allegheny, midway through the fourth period. Along with Elliot, 6-6 junior Eric Brown and senior Duane Tymous sparked the comeback as the duo finished with 19 and 10 points, respectively.

The deficit remained at two points for McKeesport at 73-71 with a little over two minutes to play, but the visitors could come no closer as North Allegheny pulled away with clutch shooting from the free-throw line. NA converted on 29 of 35 shots from the charity stripe. Sandherr did the bulk of the damage with 9 of 10 shooting from the line and Keegan Phillips knocked down 5 of 6 from the free-throw line. Steady throughout the game, Phillips netted a game-high 26 points and was named the Wright Automotive Player of the Game.

Other top performers for NA included Sandherr who completed the evening with 16 points, and junior Griffin Sestili who produced 10 points and eight rebounds. Also posting a double-double on Tuesday night against Monessen, Sestilli was named the MVP of the Wright Automotive Holiday Tournament.

North Allegheny improves to 7-2 overall with the win, while McKeesport drops to 5-4 on the season. NA will return to section play on Tuesday with a home contest against the Pittsburgh Central Catholic Vikings.