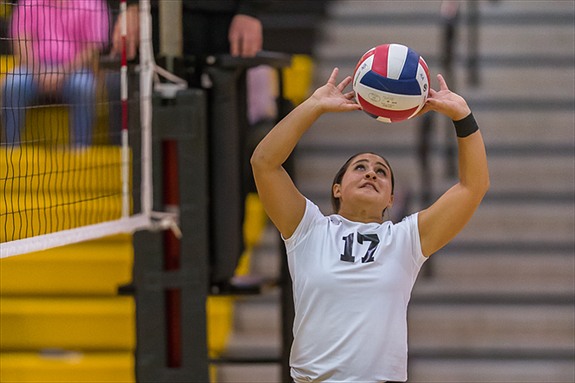 The North Allegheny Girls Volleyball Team followed up on their win over second-ranked Shaler with a 3-0 trouncing of the Hampton Talbots on Tuesday night. The Lady Tigers picked up the victory with set scores of 25-13, 25-22, and 25-9.

Head coach Heidi Miller used the majority of her varsity roster on this night with a host of different players contributing to the victory.  In the opening set, the Tigers held a slim 7-6 lead before pulling away for the 25-13 win.  Junior Erin Swartz helped NA assert itself early with a pair blocks and senior Danielle Wall collected three kills in the set.

In the second set, the Swartz sisters took over the action.  Erin Swartz collected a pair of kills and younger sister Lauren Swartz hammered Hampton with her lefty swings, notching five kills.  The Talbots kept paced with the Tigers in the second set thanks to the play of senior LeAnne Disco finished with nine kills unofficially. However, NA was able to outlast Hampton for the 25-22 win.

The Lady Tigers stormed out of the gates in the third set, burying the Talbots for a prompt 17-2 lead. Senior Jessica Samuels helped NA roll off 12 straight points during the early run of points with a pair of aces and numerous digs.  In the end, it was Erin Swartz who finished off the Talbots with four more kills to lift the Tigers to a 25-9 win in set three to cap the overall victory. Erin Swartz was named the Wright Automotive Player of the Game by the North Allegheny Sports Network.

North Allegheny now sits at 10-0 overall and 7-0 in section play.  Hampton stays winless in Section 3-AAA with an 0-6 record.  The Lady Tigers return to action on Thursday night with a home contest against the Butler Golden Tornado.