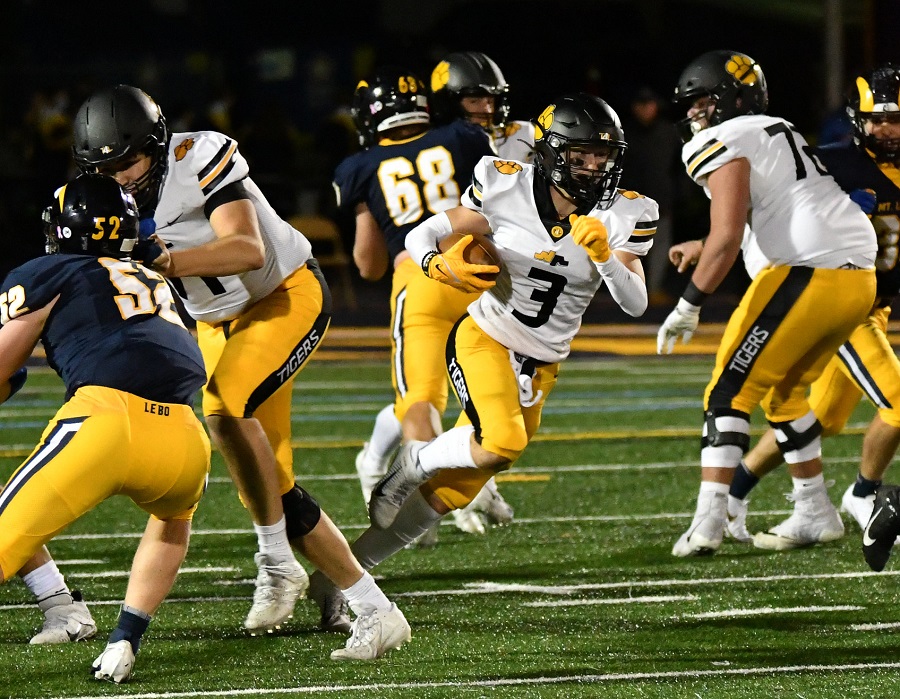 The North Allegheny Tigers fell just short of a second straight trip to the WPIAL championship game with a 28-17 loss at top-seeded Mt. Lebanon in the Class 6A semifinal round on Friday night. The Blue Devils used three return touchdowns, including two from senior Eli Heidenreich, to punch their ticket to the title tilt for the first time since 2000.

Heidenreich’s first return score came on North Allegheny’s opening drive as the Navy commit intercepted a pass and returned it 38 yards for a touchdown and a 7-0 lead with 10:37 to play in the first quarter.

North Allegheny’s next possession ended on a fumble at the Mt. Lebanon 41-yard line but the Tigers defense held strong and a forced a punt from midfield. Mike Beiersdorf’s punt was blocked by sophomore Aiden Buggey, who scooped up the loose ball and returned it 10 yards to the Blue Devils 16-yard line. The Tigers converted the blocked punt into a 26-yard field connection by Harron Lee, trimming the deficit to 7-3 with 5:24 to play in the opening stanza.

On the final play of the first quarter, Mt. Lebanon was faced with a 4th and 3 at the NA 31-yard line. Blue Devils quarterback Joey Daniels scrambled for a 31-yard touchdown run to extend the ML lead to 14-3.

On the ensuing possession, North Allegheny quickly moved down the field on a 4-play, 70-yard scoring drive. A 16-yard scramble by sophomore quarterback Logan Kushner, followed by an offsides penalty, helped NA move the ball into Mt. Lebanon territory. An 11-yard run by Kushner and a 29-yard pass by Kushner to tight Daniel Sellers moved the ball inside the 10-yard line. A roughing the passer penalty advanced the ball to the 4-yard line and that’s when running back Andrew Gavlik toted the ball into the end zone to trim the Mt. Lebanon lead to 14-10 with 11:03 to play in the second quarter.

Later in the second period with 7:27 remaining, Heidenreich struck again and returned a punt 41 yards for a touchdown to extend the Blue Devils lead to 21-10.

The Tigers immediately answered with a 5-play, 70-yard drive that was spearheaded by Gavlik. The junior tailback sparked the possession with a 20-yard run and capped the drive with a 3-yard plunge to pay dirt to bring the score to 21-17, Blue Devils. Gavlik, who entered the game with just six carries for 29 yards and two touchdowns on the season, finished the night with 11 carries for 60 yards and two touchdowns. For his efforts, Gavlik was named the Wright Automotive Player of the Game.

With North Allegheny on the comeback trail, the Tigers seemed poised to take the lead with another possession with 2:40 left before halftime. However, on a 2nd down and 6 at the NA 26-yard line, senior linebacker Jack Smith sacked Kushner and forced a fumble that lineman Connor Young converted to a scoop and score 10-yard fumble return touchdown to grow the Mt. Lebanon advantage to 28-17.

The game turned into a defensive struggle in the second half with both teams missing a field goal in the fourth quarter but neither cracking the scoreboard. With Daniels sidelined after halftime, Mt. Lebanon running back Alex Tecza, who finished with 158 yards on the night, rushed for 96 yards in the second half to help the Blue Devils grind down the clock en route to the 28-17 victory. Tecza accounted for nearly half of the total yards amassed in the second half by the two teams combined.

Mt. Lebanon improves to 11-0 on the season and will take on Central Catholic in the WPIAL Class 6A championship game on Saturday at Norwin High School. North Allegheny’s season comes to an end with a 7-5 record and a sixth consecutive appearance in the WPIAL semifinals. Congratulations to head coach Art Walker, the entire coach staff and all of the 2021 NA Tigers for an exciting and memorable season.