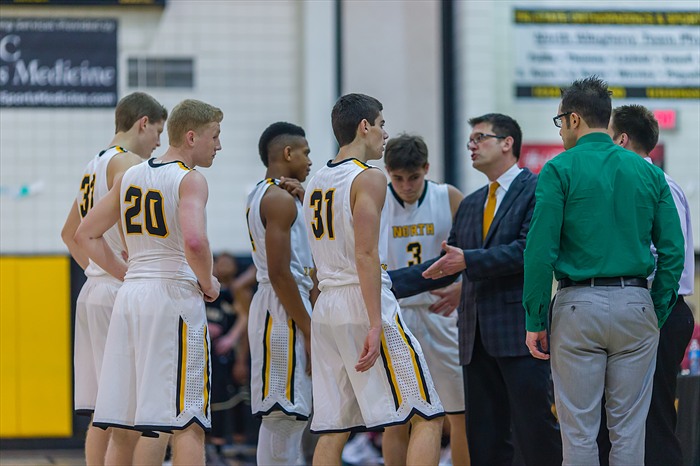 The Pine-Richland Rams dealt the North Allegheny boys’ basketball team a 60-52 setback on Tuesday night in a Section 3-AAAA contest. The Rams limited the Tigers to 22 percent shooting from beyond the arc and held NA’s top scorer, Cole Constantino, to just four points. The outcome trims North Allegheny’s lead in the section standings to a half game in front of second-place Pine-Richland.

The Tigers pounced on the Rams in the first quarter for a 9-0 lead, frustrating their neighborhood rival with a fiery press defense. NA forced seven Pine-Richland turnovers in the opening period and turned them into a bevy of easy layups, but following a timeout by PR coach Jeff Ackerman, the Rams began to compose themselves and eventually whittled down the deficit.

Pine-Richland turned the ball over only eight more times for the rest of the game and took the lead in the third quarter, 32-31. Freshman Phil Jurkovec helped lead the way for PR, scoring 11 of his 13 points in the second half. Senior Ben DiNucci netted 8 of his 12 points in the second half and was one of four Rams to finish in double figures.  Andrew Petcash contributed 11 points and Adam Alexander scored 10.

North Allegheny and Pine-Richland traded buckets in the third quarter as the Tigers still held a slim 42-41 lead entering the fourth quarter.  NA freshman guard Curtis Aiken delivered several timely shots and poured in three 3-pointers on what was otherwise a cold night for the Tigers from beyond the arc (6 of 27). Aiken finished with 12 points, to go along with four assists and three steals.  For his efforts, Aiken was named the Wright Automotive Player of the Game.

With NA trailing 47-44 midway through the fourth quarter, Aiken tied the game at 47-47 with a trey.  However, Pine-Richland followed with a 13-3 run to put the game out of reach.  Along with Aiken, senior Will Sandherr scored a game-high 15 points and senior guard Mike Fischer added nine points.

North Allegheny falls to 14-2 overall and 6-2 in Section 3-AAAA.  Pine-Richland improves to 12-4 overall and 5-2 in section play.  The Tigers will return to the court on Saturday night for a non-section home game against Hampton in the Hoops For A Cure Rumble Up North. Start time is slated for 8:30 pm.