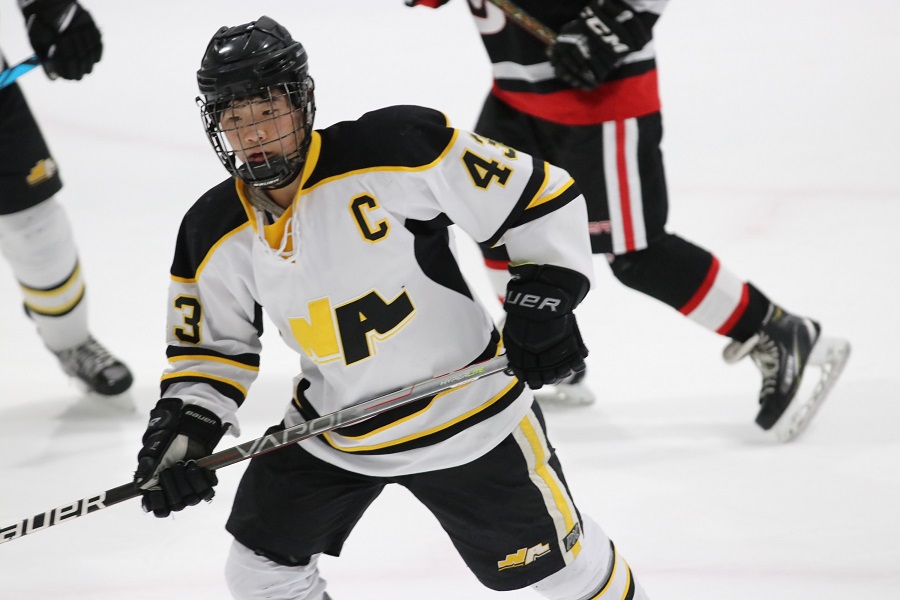 The North Allegheny ice hockey team continued its early-season surge on Thursday night with a 4-1 win over the Upper St. Clair Panthers at the Baierl Ice Complex in Warrendale.

The reigning Penguins Cup champions got off to a quick start with a goal by Kyle Holmes, his fourth of the season, just 32 seconds into the game for an immediate 1-0 lead. At the 6:05 mark of the first period, sophomore Lorenzo Calaizzi jumped on a loose puck rebound for his third goal of the season and the Tigers’ lead stretched to 2-0.

Even though North Allegheny stunned Upper St. Clair in the early going, the Panthers settled into the game and nearly scored twice in the remaining minutes of the period. By early in the second period, the Panthers finally tickled the back of the NA net on a marker by junior Aaron Stawiarski at the 1:06 mark to trim the NA lead to 2-1. North Allegheny killed off two penalties in the period to keep its one-goal lead intact by intermission.

The Tigers took the ice energized in the third period and netted a pair of goals to put the game away. After a penalty on each side opened the ice for a 4-on-4, North Allegheny senior Connor Chi tallied his eighth goal of the season at the 7:15 mark of the period for a 3-1 lead. A little over a minute later, senior Trey Gallo scored his eighth of the campaign as well to give the Tigers a 4-1 advantage. Gallo also assisted on the Chi goal for a two-point night and Wright Automotive Player of the Game honors. Senior Nolan Collinear also finished with a two-point performance with a pair of assists.

Junior goalie Rylan Murphy helped North Allegheny kill one more penalty in the waning minutes of the game to preserve the three-goal victory. Murphy made 18 saves to collect his fifth win of the season. Upper St. Clair’s Jake Fisher made 29 saves and was saddled with the loss.

North Allegheny improves to 7-1-0 on the season and remains in first place in the Class AAA standings with 14 points. Upper St. Clair falls to 2-5 with its fifth loss in a row. The Tigers will face Cathedral Prep on the road on Thursday, Nov. 18 at 8:30 p.m.