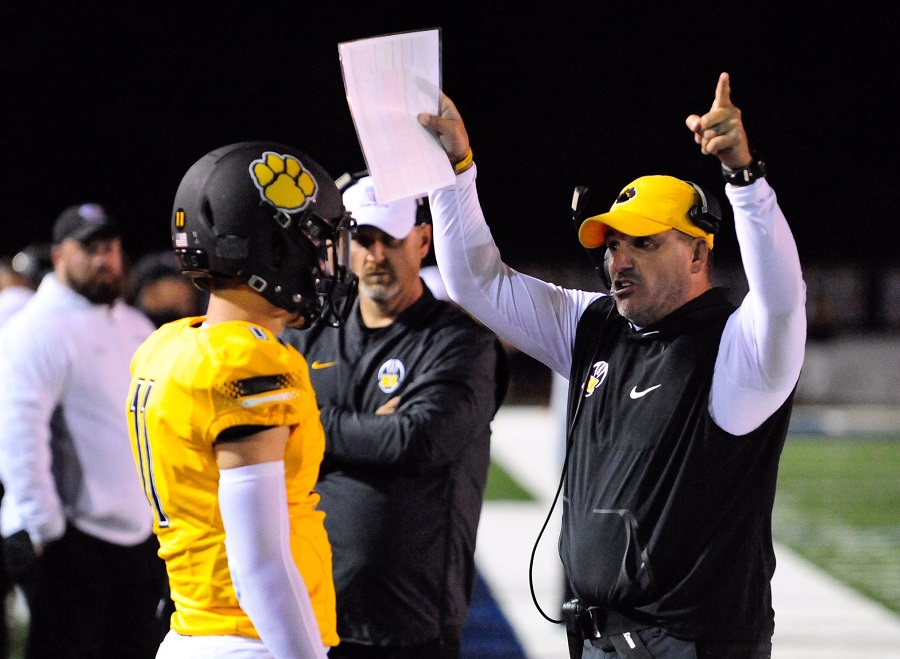 A quarterfinal-round bye is at stake tonight in Gibsonia as the undefeated North Allegheny Tigers (9-0, 7-0) visit the Pine-Richland Rams (8-1, 6-1). A win for North Allegheny would give the Tigers the No. 1 seed in the Class 6A playoffs and the Quad County Conference title for the second consecutive season. A Pine-Richland victory could create a three-way tie for first place in the conference, bringing tie-breaker points into the picture to determine who receives the two byes in Class 6A. Central Catholic visits Mt. Lebanon tonight in another game that bears a great deal of weight in the playoff picture and seeding.

For North Allegheny the scenario is simple as the Tigers control their own destiny. A win and the Tigers are conference champs. NA is in driver’s seat thanks to an 11-10 win over Central Catholic back in week two. Since then, the Tigers have run roughshod through Class 6A upon entering tonight’s regular season finale.

Pine-Richland’s lone loss is a 29-7 defeat at the hands of Central Catholic in week six. The Rams have won three straight since, including back-to-back victories over Mt. Lebanon and Seneca Valley.

Winners of the last two Class 6A championships, the Rams graduated their entire offensive line from last year’s championship team but possess plenty of top-flight talent at the skill positions. Junior quarterback Cole Spencer has taken a giant leap forward this season, having thrown for over 2,000 yards, with 24 touchdowns and just four interceptions. Luke Meckler is the leading rusher for the Rams with 324 yards and eight rushing scores. Junior wideout Eli Jochem is the top receiving target with 44 catches for 745 yards and 10 touchdowns.

While the Rams are a high-flying offensive unit, the Tigers prefer the ground-and-pound approach. Running behind a big and burly offensive line, senior tailback Percise Colon has rushed for 834 yards and nine touchdowns. Senior multi-purpose player Luke Colella is the second-leading rusher with 248 yards and six touchdowns, to go along with a team-best 31 receptions for 392 receiving yards and four more scores. Quarterback Ben Petschke is the third-leading rusher for North Allegheny with 207 yards and three touchdowns. Petschke has thrown for 875 yards with nine touchdowns and only one interception.

Pine-Richland has won four of the last six games against North Allegheny, but the Tigers won the most recent meeting in the 2018 regular season finale, battering the Rams 27-7. Pine-Richland led 7-0 at the half in that game but the Tigers roared back in the second half behind a 141-yard rushing performance from Ben Maenza. The Rams posted only 174 total yards in the contest and had a negative-two yards in the fourth quarter.

The two-time reigning Class 6A champions, Pine-Richland is trying to become just the second team to win three consecutive WPIAL titles in the largest classification. The only other team to accomplish that feat was North Allegheny from 2010-2012.

Kickoff for tonight’s game is slated for 7:00 p.m. in Gibsonia. The game will be broadcast live via the internet by the North Allegheny Sports Network, with the pregame show beginning at 6:40 p.m. To listen to tonight’s game, click here.