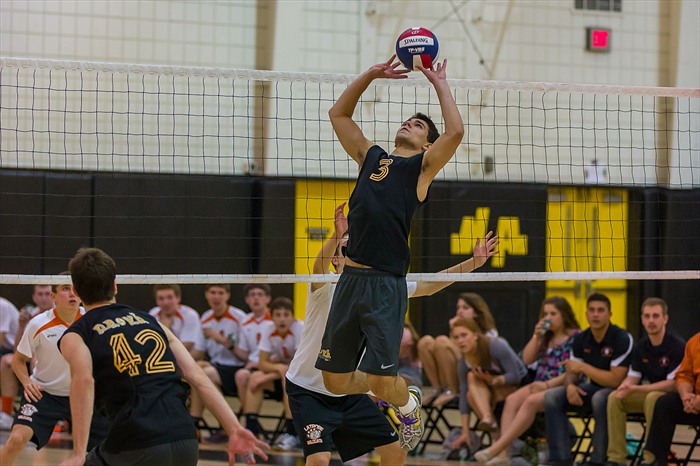 For an unprecedented eighth year in a row, the North Allegheny Tigers are WPIAL champions in boys volleyball.

The Tigers used a furious rally in game one to build momentum and propel them to a 3-0 victory over Norwin for the Class AAA crown. Set scores for Thursday night’s match at Baldwin were 25-23, 25-11 and 25-21.

Norwin jumped out quickly in the first set, scoring the game’s opening four points and building a seven-point advantage. With the score at 16-9, however, North Allegheny began chipping away at the Knights’ lead. By late in the set, the Tigers had stormed all the way back to tie the score at 22. Then, with the score knotted at 23, a block by senior David Haus and a Norwin miscue gave North Allegheny the come-from-behind victory.

Senior Mitch Higgins set the tone for a big night for himself with six kills, two blocks and an ace in the opening game alone. Classmate Brendan Brown added four kills and two blocks to aid the comeback.

Carrying all of the momentum on their side, the Tigers flexed their muscles in game two. With the score still tight at 7-5, North Allegheny embarked on a 12-2 run that created separation and then put the Knights away.

Game three proved to be a back-and-forth affair, as neither team managed to gain an edge of more than three points until the last point of the tournament. After a kill by Norwin’s Aaron Shaffer moved the score to 22-21 in favor of the Tigers, North Allegheny used two Brown kills and an unforced error by the Knights to rattle off three straight points and secure yet another championship.

Brown tacked on another five kills and three blocks in the third set, bringing his totals to 11 and seven, respectively, on the night.

Higgins finished with a team-high 15 kills to go along with three blocks, two aces and a dig. For his performance, the senior earned the honor of being named the Wright Automotive Player of the Game.

Before the match, four Tigers were named to the All-WPIAL First Team: Balouris, Haus, Higgins and Brown. Brown also was named Co-MVP along with Butler senior Matt Huey.

Both teams now turn their attention to the PIAA playoffs, which begin on Wednesday. Locations and start times have yet to be determined.