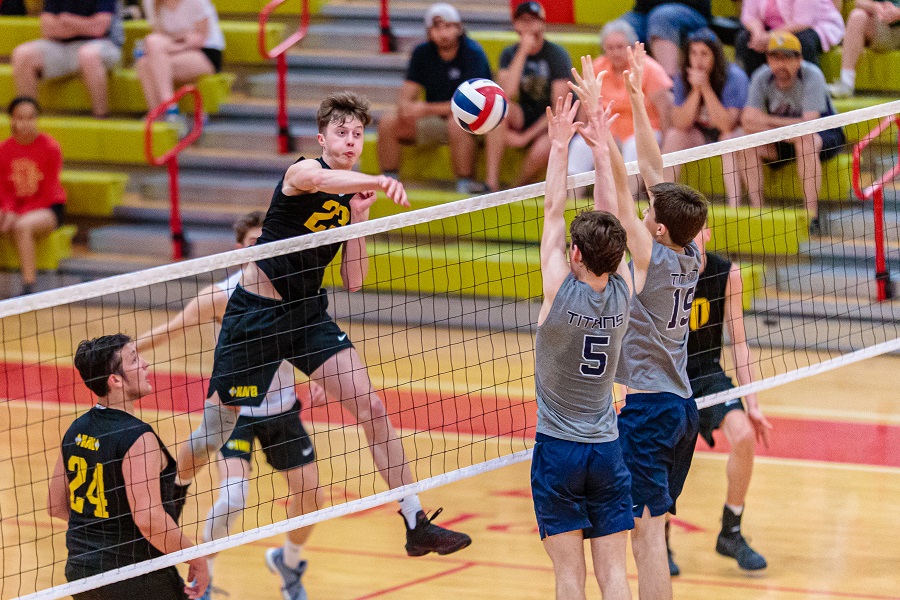 The North Allegheny boys’ volleyball team faced section rival Shaler in the PIAA Class AAA quarterfinals on Saturday evening at Penn Hills High School and came away with a 3-0 sweep over the Titans. The Tigers won by set scores of 25-16, 25-17 and 25-21 to advance to the PIAA semifinals on Tuesday night in a rematch of the WPIAL championship against Bethel Park.

North Allegheny got off a to a good start in set one with a well-balanced attack. Seniors Drew Hunker notched three kills in the opening set to help NA to a 25-16 win. Hunker tallied 10 kills on the night.

In similar fashion, the Tigers led set two most of the way en route to a 25-17 victory. Senior Ben Mendes tallied four kills in the set and finished with seven for the contest.

With their backs to the wall, the Titans opened the third set with a 5-0 lead, including a kill and block from Daniel Evans. Shaler maintained an 8-6 advantage before North Allegheny took control. Senior Alex Zubrow put forth a dominating showing in the final set with eight kills to propel NA to a 25-21 win. Finishing with 10 kills and a team-high five blocks, Zubrow was named the Wright Automotive Player of the Match.

North Allegheny improves to 21-0 on the season and extends its winning streak to 44 in a row. Reaching the PIAA playoffs for the first time in program history, Shaler ends its banner year with a 17-5 record.