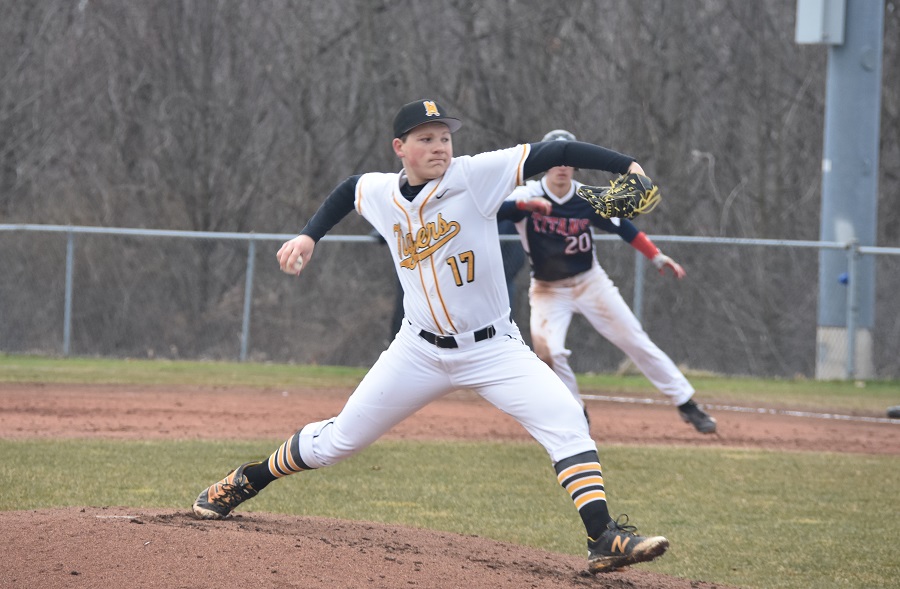 In their 2019 home opener, the North Allegheny Tigers won in walk-off fashion with a 2-1 triumph over the Shaler Titans on Friday afternoon. Tied 1-1 in the bottom of the seventh inning, senior Ryan Dougherty raced home for the game-winning run on a wild pitch to give North Allegheny its second straight win.

Against Shaler reliever Alec Englemore, Dougherty reached base on a one-out double in the seventh inning. C.J. Weller was intentionally walked and the runners advanced to second and third following a wild pitch by Englemore. The Shaler hurler’s erratic pitching continued and another wild pitch by Englemore allowed Dougherty to score the game-winning run for a 2-1 non-section victory.

North Allegheny reliever Zach Trdinich earned the win with two innings of work, permitting only one run with four strikeouts and two walks. Starting pitcher Ben Tharpe was masterful with five innings of four-hit baseball, shutting out the Titans with seven strikeouts and no walks.

Tharpe and Shaler starter Jake Bredl were locked in a pitcher’s duel for most of the afternoon in a scoreless game through four innings. The Tigers scored the game’s first run in the bottom of the fifth courtesy of an RBI single from Anthony Hattrup that plated Shane Murphy for a 1-0 lead.

Shaler evened the score in the top of the sixth on an RBI double by Zach Hernon.

North Allegheny improves to 2-2 on the year, while Class 5A Shaler falls to 2-2. The Tigers will try to make it three straight wins when they visit Upper St. Clair on Monday at 4:00 p.m.