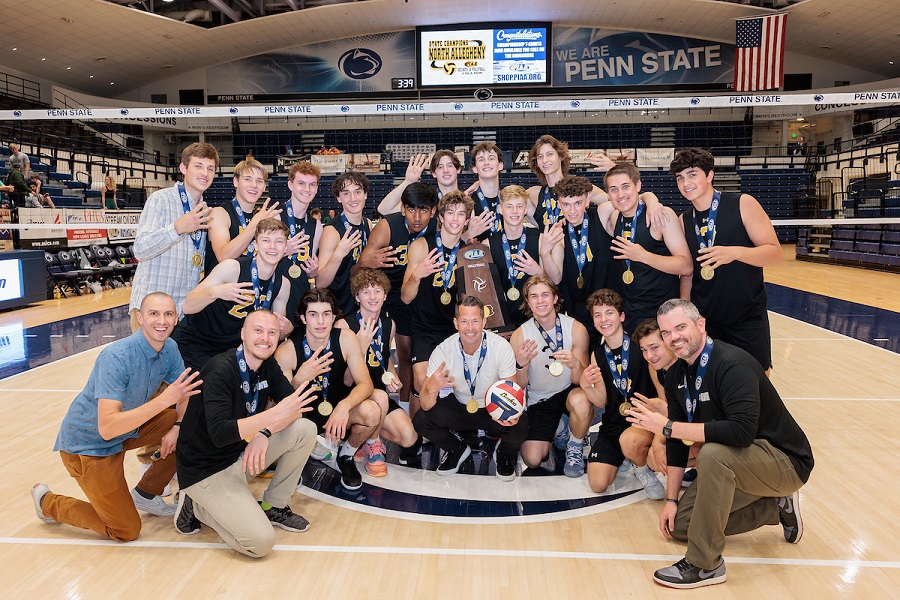 In a rematch of last year’s state championship, history once again repeated itself as the North Allegheny boys’ volleyball team defeated the Central Dauphin Rams, 3-1, in the PIAA Class AAA championship. Identical to the year prior, the Rams won the first set but the Tigers responded by winning the next three sets to earn a fourth consecutive PIAA crown. The Tigers are just the fourth team to win four or more state championships consecutively. NA won by set scores of 23-25, 25-16, 25-12 and 25-23.

Central Dauphin entered the contest with an unblemished record and lost only one set all season. The Rams were also the fifth-ranked team in the country according to the USA Today/AVCA Super 25 Poll. The District 3 champs took a 4-3 lead in the opening set and never trailed en route to a 25-23 win. The Tigers, who were ranked No. 18 in the Super 25 Poll, stayed within striking distance and trailed by one point seven different times in the set but couldn’t quite draw even. Central Dauphin senior outside hitter Tyler McConnell led the way with four kills and a block in the opening game and senior Jacob Miller added a pair of aces. 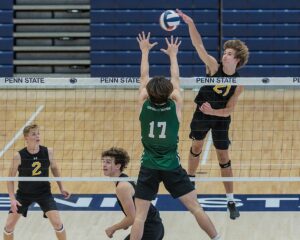 North Allegheny’s serve receive flipped the script in set two as senior Titus LaMay, the team leader in aces, made his presence felt. LaMay totaled two of his team-high four aces in set two and sparked an NA outburst. Senior outside hitter Cole Dorn developed the hot hand and scorched the Rams with six kills and an ace of his own to propel NA to a 25-16 win. Senior Jack Birch and junior Nico Sfeir tallied three kills each in the set.

With NA leading 6-5 in the third set, LaMay’s serves sparked an 8-0 run to put the Tigers in command, 14-5. Central Dauphin’s senior middle hitter Braden Berkebile did his best to keep the Rams in the game with four kills, but North Allegheny cruised to a convincing 25-12 victory.

The fourth set was much closer as junior middle hitter Conner Foxwell produced five kills to give Central Dauphin a 14-11 advantage. The Tigers battled back to tie the score and the set was deadlocked at 21-21 in the late stages. Dorn continued his torrid hitting for the Tigers and produced three kills down the stretch to lift NA to a 25-23 win and a 3-1 triumph in the 2022 PIAA championship.

Dorn totaled a team-high 21 kills on the night and earned Wright Automotive Co-Player of the Match honors with senior setter Caleb Schall, who distributed 48 assists.

Sfeir had a strong performance with 12 kills, followed by Birch and senior Jax Wilhite with seven kills each. The Tigers boasted a team hitting percentage of .393. 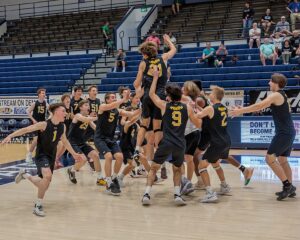 North Allegheny concludes the 2022 season with an 18-1 record, capturing WPIAL and PIAA crowns along the way. Central Dauphin ends the year with a 21-1 mark.

Over the past four seasons, North Allegheny has posted a record of 83-1. Including the North Allegheny girls’ volleyball program, the two teams have a combined record of 191-3 over the past five seasons with a combined nine PIAA titles in that span. The only PIAA championship not won by an NA team over the last five years was in the spring of 2020 as no season took place due to the COVID 19 pandemic.