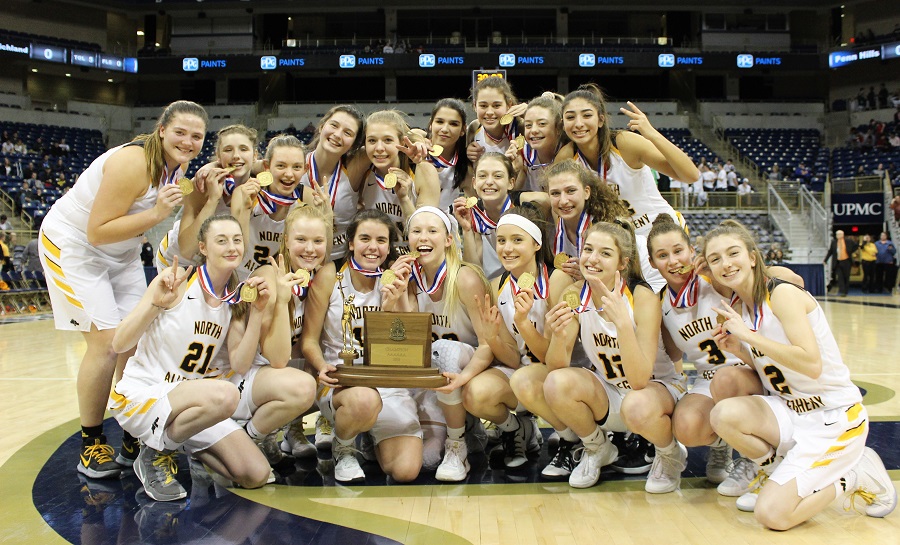 In a dazzling performance at the Petersen Events Center, the North Allegheny Tigers won their second straight WPIAL Class 6A championship with a 79-48 mercy-rule win over No. 2 Peters Township on Saturday night. Now 25-0 on the season, the Tigers became the 14th girls’  basketball team in WPIAL history to win a championship with an undefeated record. North Allegheny also earned the largest margin of victory ever in the WPIAL’s largest class with the 31-point win.

The Tigers played a near-perfect game and had four players reach double figures in the victory, including junior Rachel Martindale who scored her 1,000th career point in the game.  Martindale scored 13 points, along with senior Courtney Roman. Roman had the hot hand from the perimeter, draining 4 of 6 shots from beyond the arc. Senior Piper Morningstar and freshman Lizzy Groetsch each netted 18 points for the team high. Groetsch put forth a sterling all-around performance, adding six rebounds, six assists and two steals on her way to Wright Automotive Player of the Game honors. 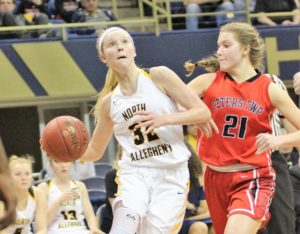 Freshman Lizzy Groetsch was named the Wright Automotive Player of the Game with 18 points, six rebounds and six assists.

Saturday night’s title tilt was a rematch of a regular season meeting at Peters Township on February 8 in which the Tigers earned a 67-54 victory. In the first foray with the Indians, North Allegheny led by only one point with 2:30 left in the game before pulling away at the free-throw line. In the WPIAL championship, the Tigers never gave the Indians a glimmer of hope.

Leading 25-21 in the second quarter, North Allegheny used an 11-2 run to end the half and took a 36-23 lead into intermission. From there, the Tigers rolled to the win in the second half and invoked the mercy rule by the fourth quarter. In the first meeting, rebounding and 3-point shooting proved to be the difference makers. For the WPIAL title, the deciding factors remained the same.

North Allegheny outrebounded Peters Township, 33-16, including 12 offensive boards. The Tigers shot 50-percent from beyond the arc, pouring in 9 of 18 attempts. Peters Township shot a paltry 1 of 13 on 3-pointers for a 7.7-percent success rate.

Peters Township junior standout Makenna Marisa did her best to single-handedly keep her team in the game and led the Indians with 25 points, over half of her team’s total output.

After earning back-to-back WPIAL gold, the undefeated Tigers will set their sights on a PIAA championship. North Allegheny improves to 25-0 overall and will face the Upper St. Clair Panthers on Friday night in the first round of the state playoffs at 6:00 pm at Cardinal Wuerl North Catholic High School. The game will be broadcast live via the internet on the North Allegheny Sports Network. Peters Township dips to 21-4 on the season and will take on rival Bethel Park in the PIAA opening round. For a look at the PIAA Class 6A brackets, click here.