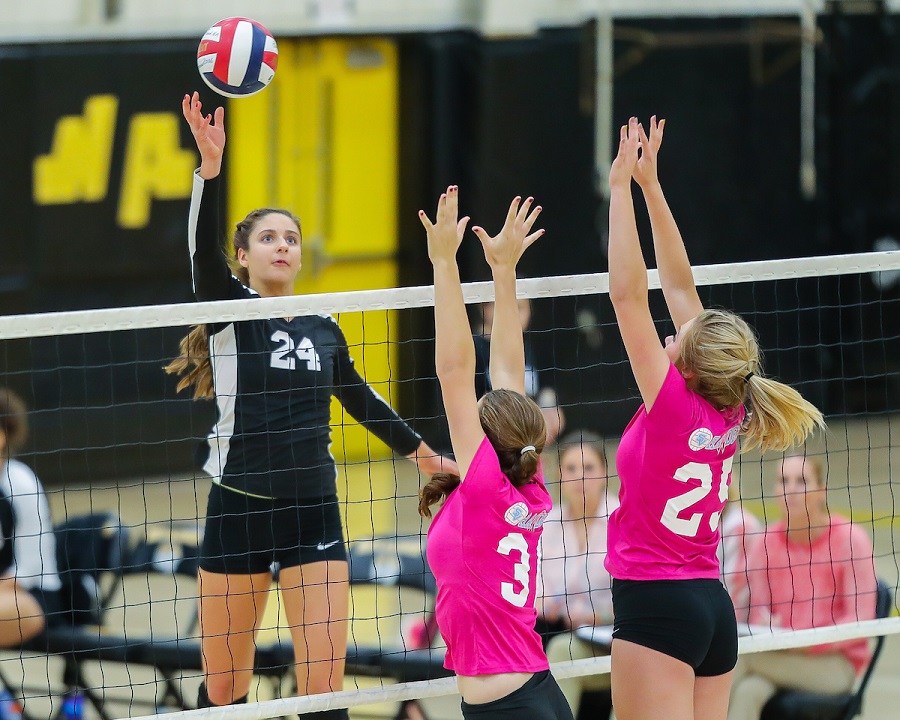 The North Allegheny girls’ volleyball team climbed into a first-place tie atop Section 1-AAAA thanks to a thrilling 3-1 triumph over the top-ranked Seneca Valley Raiders on Tuesday night. The formerly undefeated Raiders had lost only one set in section play all season and that was to North Allegheny during a 3-1 win on September 20 in Harmony, PA. In the rematch at NASH, it was the Tigers who again dealt the Raiders a first, this time their first loss.

North Allegheny set the tone for the night in the opening set by stifling the Raiders by clogging the net up front. Junior Kayla Dinkins posted four blocks and two kills in the first set, and junior Mikayla Logan tallied two blocks and two kills to help the Tigers to a 25-17 victory in set one.

The second set was a battle between the two teams, and while the score was tied at 19-19 late, Seneca Valley never led and dropped the set, 25-23. Dinkins was again a force in the middle with three blocks and two kills, while sophomore Anna Sprys added three blocks and a kill to spearhead the Tigers efforts.

Unwilling to go down without a fight, the Raiders controlled the third set thanks in large part to the efforts of senior captain Tatum Poirier who delivered six kills and two aces in a 25-14 decision.

Poirier, junior Emily Devlin and senior Maria Alfano helped Seneca Valley rally from a five-point deficit in set four to take a 24-20 lead, sitting on the brink of forcing a fifth set. However, the Lady Tigers turned into the comeback cats and constructed a rally of their own. Sophomore Maddy Mueller sparked the comeback with a well-placed tip and an ace to cut the score to 24-22. After the Raiders made contact with a ball that went out of bounds to trim the score to 24-23, Dinkins came through with a block to tie the game at 24-24. The Tigers completed the comeback courtesy of the timely swings of senior Maria Mosbacher who delivered kills for three of the last four points of the game to send NA to a 28-26 win that capped a 3-1 victory over Seneca Valley.  For her efforts, Mosbacher was named the Wright Automotive Player of the Game. For an audio highlight of the match-ending kill by Mosbacher, click here.

Mosbacher, along with Erin and Allena Carmody, played a significant role on defense and contributed numerous digs. Kallan Baldis, Emily Keiser and Abby Miller all combined to quarterback the offense from the setter position.