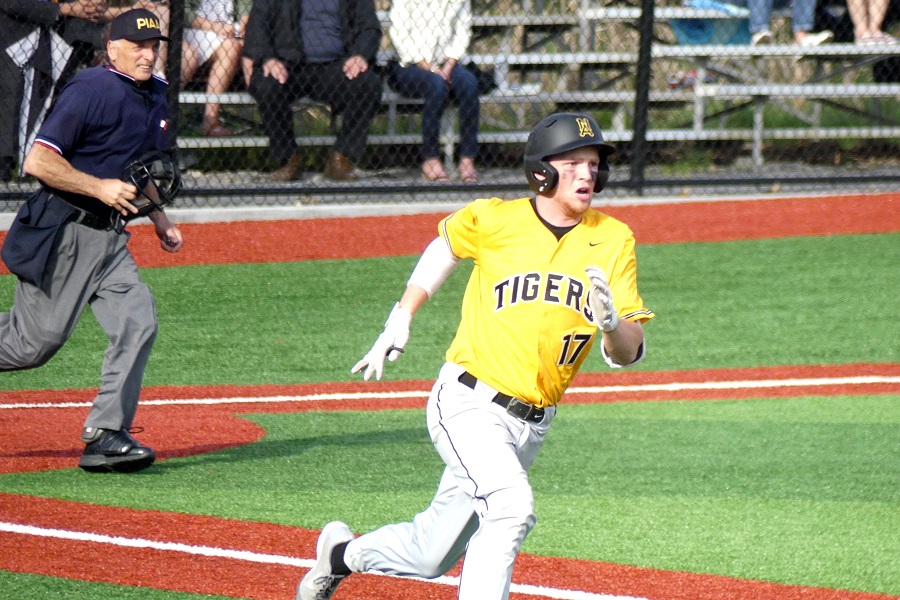 A single by Andrew Funovits in the bottom of the seventh inning lifted Seneca Valley to a walk-off win over North Allegheny, 2-1, on Thursday afternoon.

Locked in a pitcher’s duel for the second straight day, the Tigers trailed 1-0 entering the top of the seventh. Seneca Valley starter D.J. Alway went six strong innings and allowed only one hit to the Tigers, but after hitting the 100-pitch mark the right-hander gave way to reliever Michael Morrone for the seventh. Junior Colin Cain welcomed Morrone to the ballgame with a lead-off double to right field. An out later, Cain advanced to third on a groundout by Andrew Turzai. With the Tigers down to their final out, senior Kevin Janosko came through with a clutch RBI double to drive home Cain and the game was tied, 1-1.

While the Tigers had seemingly seized the momentum, Seneca Valley wasted little time in the bottom of the seventh with a lead-off triple by Joey Kozlina and the Funovits game-winning base hit to capture a 2-1 upset of North Allegheny. Sophomore reliever Anthony Hattrup took the loss for North Allegheny. Caropresi got the start for the Tigers and pitched well, allowing only one run on four hits in five innings on the bump. Janosko tossed one scoreless frame of relief in the sixth. Despite blowing the save, Morrone was credited with the win for Seneca Valley.

Following the loss, North Allegheny dips to 10-3 overall and 5-2 in Section 1-AAAAAA. Seneca Valley keeps its playoff hopes alive and improves to 7-7 overall and 2-5 in section play, just a half-game out of the last playoff spot with three section games remaining. The Tigers will visit Butler on Monday night at 7:00. The game will be broadcast live via the internet on the North Allegheny Sports Network.