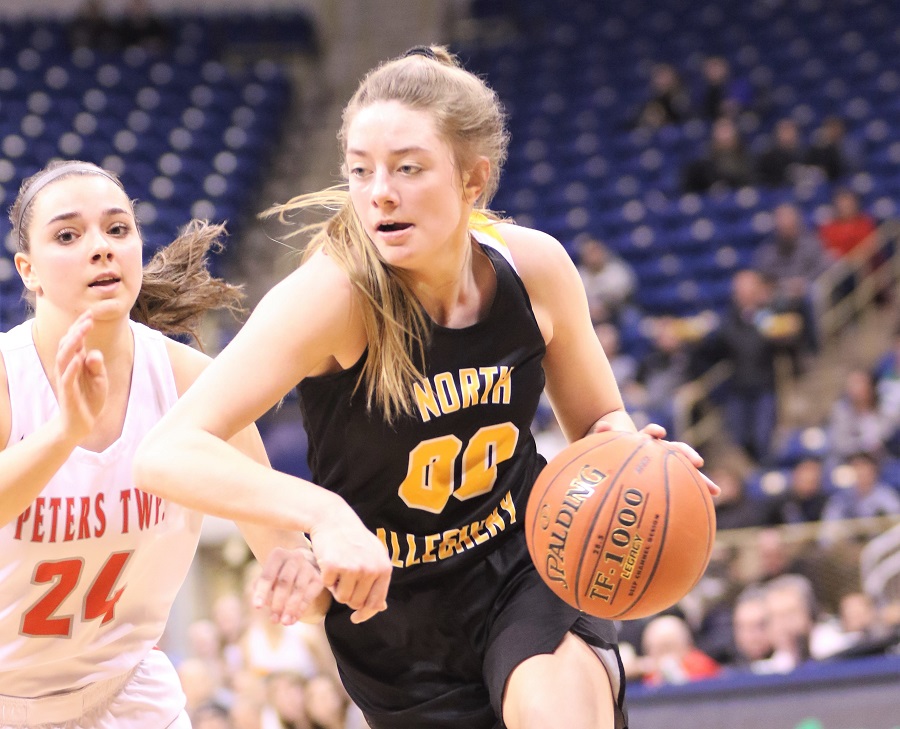 North Allegheny’s bid for a WPIAL three-peat came to an end on Saturday night at the Petersen Events Center with a 43-40 overtime defeat to Peters Township in the Class 6A championship game. The WPIAL title win for the Indians is their first in program history.

The game was a rematch of last year’s WPIAL Class 6A championship, with the Tigers claiming a 79-48 mercy-rule win over the Indians. Hoping to erase the nightmarish memories of last season’s title tilt, Peters Township opened the game with a strong first quarter that was spearheaded by senior guard Makenna Marisa. The Penn State University commit poured in 12 points in the first quarter, helping the Indians to a 14-10 lead.

Senior Isabella Mills opened the second quarter with a layup to increase the Peters Township lead to 16-10. However, the North Allegheny defense clamped down on Marisa for the rest of half and the Tigers shooters heated up with a 9-0 run to grab a 19-16 advantage with 30 seconds left before intermission. Senior Rachel Martindale sparked the run with a 3-pointer, followed by consecutive baskets from Katerina Balouris, Lizzy Groetsch and Taylor Rawls. Peters Township capped the first-half scoring on a layup by junior Mackenzie Lehman to bring the score to 19-18, Tigers, at the half.

Peters Township regained the lead on the first basket of the third quarter on a rebound and put-back by freshman Journey Thompson for a 20-19 advantage. The Tigers followed the Thompson bucket with another 9-0 run that was once again sparked Martindale. The Akron University commit posted back-to-back 3-pointers to start the run, followed by another trey by sophomore Paige Morningstar for a 28-20 NA lead midway through the third.

The Indians answered with a 16-4 run that lasted into the fourth quarter for a 36-32 lead. With Peters Township seemingly poised for a victory, North Allegheny’s championship game experience came through as Balouris contributed with a layup and Martindale converted four straight free throws to pull North Allegheny ahead, 38-36 with 1:47 remaining in the ballgame. Martindale led the Tigers offensively with a team-high 15 points, netting 12 in the second half.

With Martindale pacing the NA offense, and Groetsch playing a primary role in slowing down Marisa through three quarters and overtime, the duo of Martindale and Groetsch received Wright Automotive Co-Player of the Game honors.

The Tigers maintained their 38-36 lead until the waning seconds as Lehman tied the score at 38-38 on a last-second layup to force overtime.

In overtime, Mills made one of two free throws for a 39-38 PT lead and Lehman followed with a steal and layup, giving the Indians a 41-38 advantage with 1:45 left in overtime. Balouris responded with a layup for NA to cut the deficit to 41-40 with 1:30 to play.

A North Allegheny foul sent Mills back to the charity stripe for a one-and-one opportunity with 26 seconds remaining in OT and she converted two free throws for a 43-40 advantage for Peters Township. The Tigers had one last chance to force a second overtime, but Martindale’s 3-point try at the buzzer fell short and the Indians held on for a 43-40 victory.

Peters Township was led offensively Marisa with a game-high 17 points. Mills and Lehman added 10 points each. With the loss, North Allegheny falls to 23-2 on the season. Peters Township remains undefeated at 25-0. Both teams qualify for the PIAA playoffs which begin on Friday night.