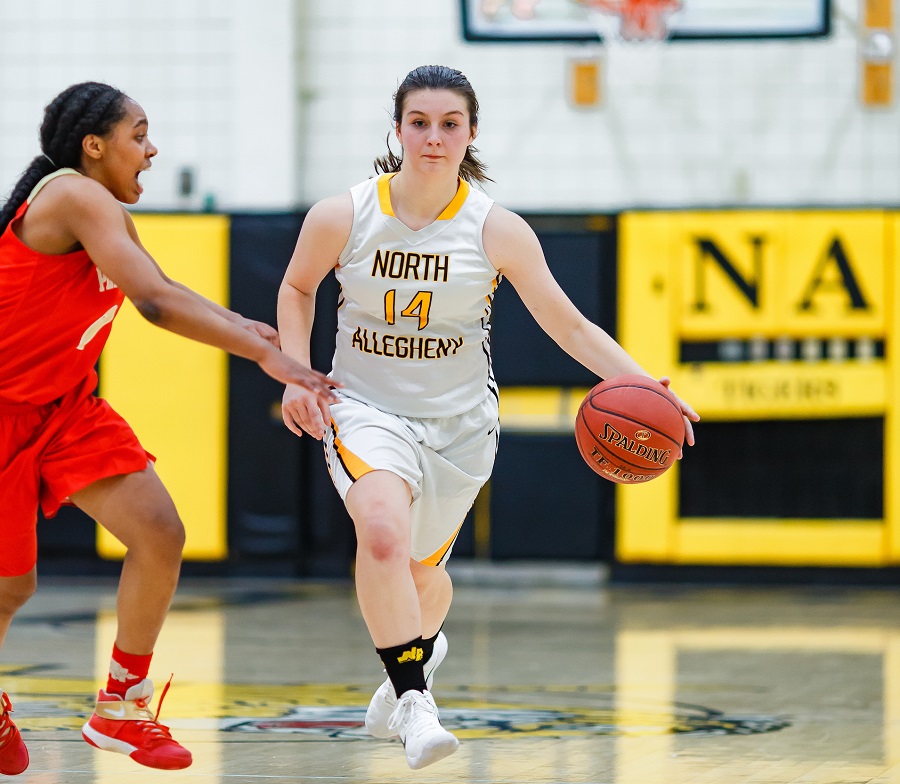 The No. 1-ranked North Allegheny girls’ basketball team earned a convincing win over the third-ranked squad in Class 5A, the Penn Hills Indians, by a 60-47 decision on Friday night at the Wright Automotive Tip-Off Tournament. The two-time reigning WPIAL champions in Class 6A built a 24-point lead in the third quarter and coasted the rest of the way. Sophomore Lizzy Groetsch scored a team-high 12 points in the win.

The very first points of the night were scored on a layup by Penn Hills senior Adia Brisker to give the visitors a 2-0 advantage. As it turned out, it was the last time the Indians led on the night. North Allegheny immediately responded with a 3-pointer by senior, and Akron commit, Rachel Martindale, for a 3-2 advantage. The shot attempt for Martindale was her first since returning from a season-ending knee injury sustained in the WPIAL championship game a year ago. Finishing with nine points and not shying away from contact on either side of the ball, Martindale was selected as the Wright Automotive Player of the Game.

North Allegheny opened up a 20-point lead by halftime, helped by senior guard Brynn Serbin, who chipped in with seven points in the first half. Senior Brooke Barcia touched double figures with 11 points and three 3-pointers. In all, 11 different Tigers scored points in the game.

Penn Hills put together a late rally in the fourth quarter but by then the game was well out of reach. Sophomore Amani Blackwell paced the Indians with a game-high 16 points. Brisker, a Niagara recruit, also totaled double figures with 10 points. It was a poor shooting effort from Penn Hills, who did not make a single 3-pointer on the night and connected on only 7 of 21 from the free-throw line.

Following the season-opening win, North Allegheny will take on Mt. Lebanon on Saturday at 3:00 p.m. in the tip-off tournament finale.