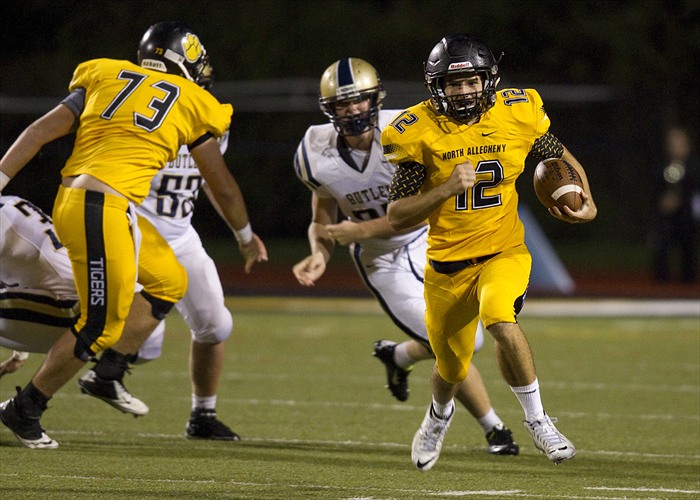 North Allegheny invoked the mercy rule en route to a Northern Seven Conference win for the second straight week, this time bashing the Butler Golden Tornado by a 49-7 final on Friday night. The Tigers outgained the Golden Tornado 332-156 and permitted only 50 yards by halftime. Senior quarterback Ethan Maenza rushed for 114 yards and two touchdowns to capture Wright Automotive Player of the Game honors. Maenza also passed for 73 yards and a touchdown.

North Allegheny received the opening kickoff and marched 56 yards on just four plays for the game’s first score. The key play in the drive was a 47-yard pass from Maenza to Niko Mermigas that set the Tigers up at the Butler 9-yard line. A penalty and two plays later, Mermigas took a reverse pitch from Mike Pope for 13-yards and a touchdown to give NA a 7-0 lead.

While the North Allegheny defense stymied the Golden Tornado, the Tigers added on to the lead late in the first quarter when Maenza tossed an 11-yard touchdown pass to Turner White for a 14-0 advantage. The Tigers continued their onslaught in the second quarter with a 9-yard touchdown run by Pope and two rushing touchdowns by Maenza. The NA signal caller scored on touchdown romps of 42 and 39 yards to balloon the score to 35-0 by intermission.

North Allegheny jumps to 3-2 overall and 2-1 in the Northern Seven Conference. Butler dips to 1-3 overall and 0-2 in conference play. The Tigers will host Mt. Lebanon for homecoming next Friday.