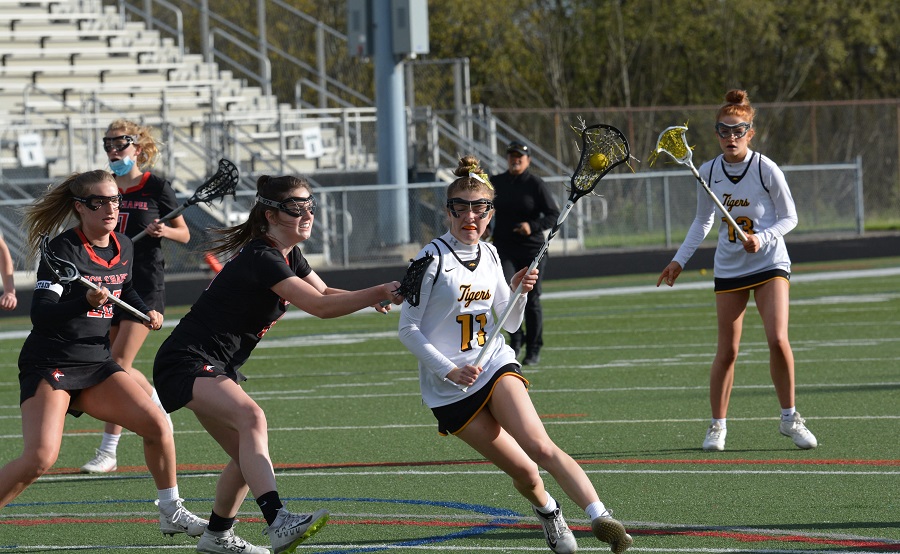 After suffering a tough defeat on Tuesday against Sewickley Academy, North Allegheny returned to its winning ways with a 13-7 section win over Fox Chapel at Newman Stadium.

The Tigers jumped out to a 4-0 lead and never looked back in this match. Lola Wilhite scored her 38th goal of the season 1:31 in of an assist from Skye DePrado. The two main cogs in the Tigers offensive machine would figure prominently throughout the night. After Bela Falo converted a free position to put NA up 2-0, Wilhite would add two more scores for a hat trick and a 4-0 lead.

After a Lily Zaltman goal for the Foxes, Wilhite would net her fourth goal of the match. Fox Chapel then scored to make it a 5-2, but the Central Michigan recruit DePrado would take over, scoring the next three Tigers goals sandwiched among Zaltman’s second. North Allegheny had an 8-3 lead. Wilhite would score her 5th of the half with :09 remaining to put the Tigers in front by five at the break.

DePrado added three more second half goals to raise her season total to 64, and Falo would cap the scoring for the Tigers with her second goal of the match and 23rd of the year. The win improved the Tigers to (9-2/7-1) on the season while Fox Chapel dropped to (7-4/6-2) while suffering its third straight loss.

Deprado’s six-goal effort coupled with a pair of assists earned the senior the Wright Automotive Player of the Match honors.

North Allegheny hits the road for a huge match-up with 6A Section 2 leader Shady Side Academy (8-0) on Tuesday night. After that match, the Tigers are homebound for the remainder of the season with five matches that are all scheduled to be broadcast on the North Allegheny Sports Network.