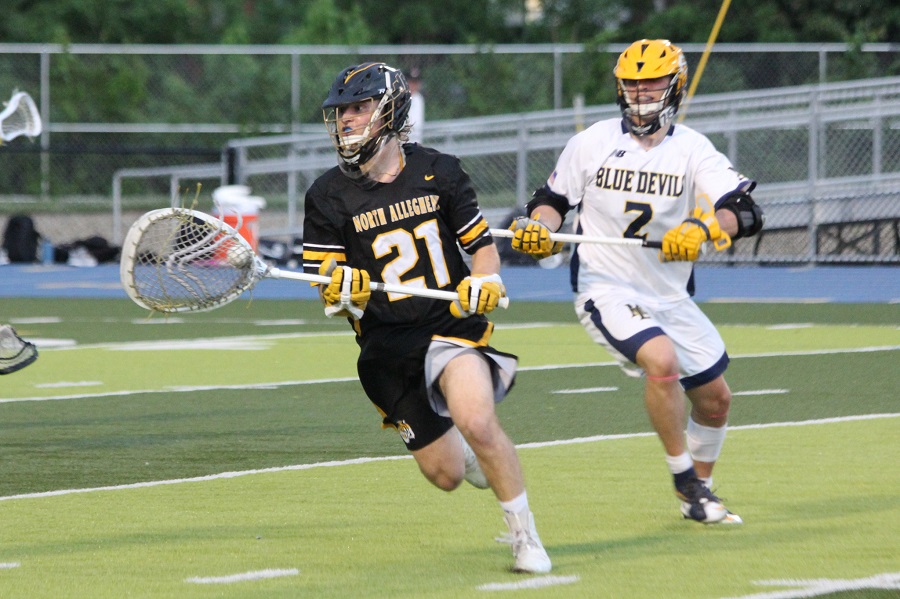 Conestoga used a stifling defense to hold the North Allegheny attack in check, and the Pioneers scored a few timely goals to defeat North Allegheny 8-3 and end the 2021 campaign for the Tigers at Manheim Township High School.

Trailing 2-0, Mason Kress scored a transition goal on the run, his third in two games, to pull the Tigers within one. Junior attack Patrick Reilly started the second quarter with his second goal of the afternoon before Cole Bordo notched his team leading 33rd goal of the season in a man-up situation of an assist by Ben Rohan to make the score 3-2. Unfortunately, that’s as close as North Allegheny would come thanks to a pair of goals in quick succession by Conestoga. Syracuse recruit Aiden Kelly scored at 6:03, and then moments later, junior Ian Kim charged forward after a face-off win to find the net an give the Pioneers the lead at 5-2.

North Allegheny, whose defense also played well in the sweltering heat, showed its resiliency once again with the man advantage. Senior Nick Eck tickled the twine off a Bordo assist at (10:48) of the third quarter and the defense held the Pioneers off the board to keep the match at 5-3 heading into the final period. The goal was Eck’s 27th tally of the year.

But Conestoga was able to put things away with three fourth quarter goals, including the hat trick for Reilly, who also added a pair of assists for the Pioneers. Conestoga improved to (16-6) with the victory, and it bears noting that with the win, District 1 will be well represented in the PIAA semifinals, as Kennett, Garnet Valley and Radnor will join Conestoga in an all-district PIAA 3A semifinal round.

The final Wright Automotive Player of the Match award for boy’s lacrosse went to senior goalkeeper Aiden Miller. The Liberty bound three-year starter made several great stops to keep the match at 5-2 and added a couple of other timely saves when the score was 5-3 to keep the Tigers alive before the Pioneers put the match on ice with a big fourth quarter.

North Allegheny finishes the year with a (14-5) record and the Tigers also captured their second boy’s lacrosse championship with a victory over Shady Side Academy in the WPIAL finals. Congratulations to head coach John Rullan and the entire North Allegheny boys’ lacrosse team for another successful and memorable season.