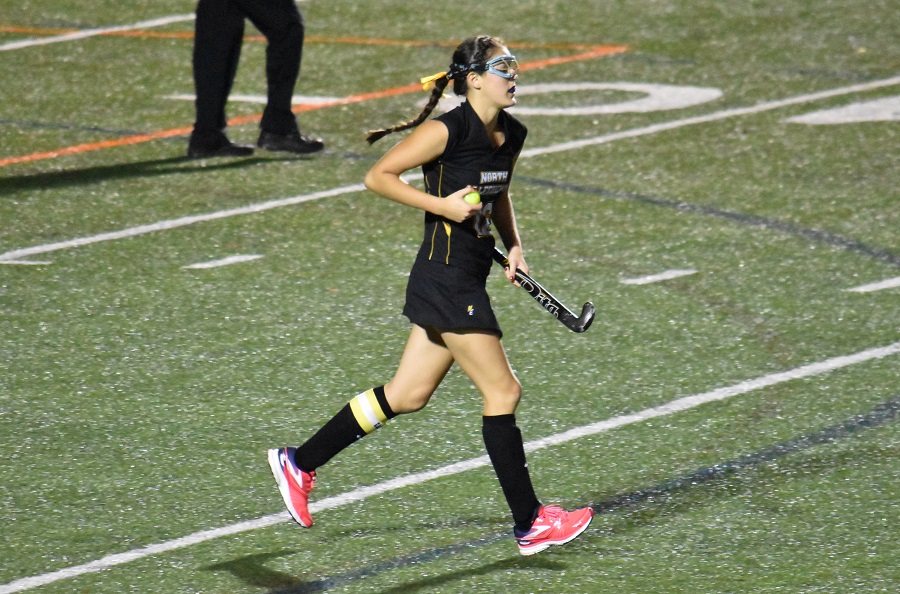 The NA girls’ field hockey team travelled to the House That Palmer Built to put its undefeated section record on the line on Tuesday when the Tigers faced the Greater Latrobe Wildcats. The Wildcats were eager to avenge their earlier 6-0 defeat to NA, but the Tigers, fronted by senior forward Maddy Snyder (claiming her third multi-goal game), once again came out on top against Latrobe; this time by the score of 4-0.

True to form, the Tigers vaulted ahead early, when sophomore forward Gracie Limauro sent a lovely pass to a wide open Angie Genter and the freshman forward tipped the ball into the left corner of the goal at the 3:38 mark.  After the first goal, both teams settled in with North Allegheny pushing play in the Latrobe end, where the Wildcats guarded their circle fiercely.  NA, doggedly determined, finally attained their second goal at 24:39 of the first half on a penalty corner when Genter inserted to senior midfielder Jessie Serody whose crisp shot from outside the circle deflected into the goal off the Latrobe goalkeeper.  The half ended with the score 2-0 with NA having four penalty corners and five shots on goal while Latrobe did not have any corners or shots.

The second half started lethargically for both teams, with play slowly moving back and forth and neither team with any bona fide opportunities. The Tigers finally broke through at the 14:40 mark when Snyder gathered a rebound in front of the goal, and swiftly popped it into the cage for a 3-0 lead.  NA would add a final goal at 25:41 when Snyder took a pass from freshman Kayley Cooper and neatly fired a shot into the left corner.  For the game, NA had six penalty corners and 12 shots while Latrobe had one penalty corner and one shot on goal.