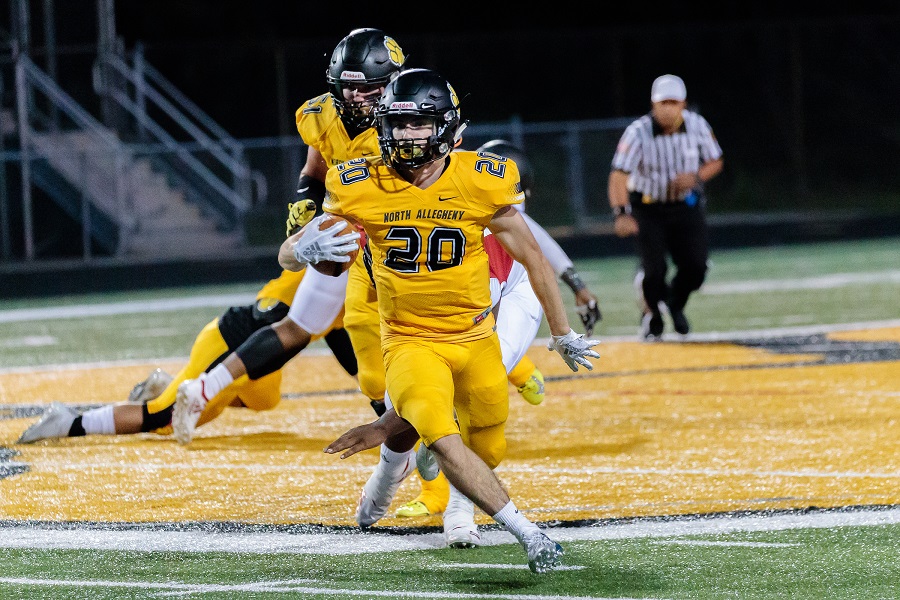 The North Allegheny Tigers planted their flag as undefeated Quad County Conference champions in Class 6A with a 27-7 victory over the Pine-Richland Rams on Friday night at Newman Stadium. Trailing 7-0 at halftime, North Allegheny stormed back in the second half with four unanswered touchdowns and limited the Rams to just 174 yards of total offense. Pine-Richland totaled a negative two yards of offense in the fourth quarter.

The Rams best drive of the night came in the first quarter as PR began an 11-play, 60-yard march to the end zone. The drive culminated on the first play of the second quarter on a 1-yard rushing score by quarterback Cole Spencer for a 7-0 lead with 11:55 on the clock.

Pine-Richland had two golden opportunities to add on to the lead in the first half thanks to two fumble recoveries deep in NA territory. However, the Rams could not capitalize on either turnover as the score remained 7-0 at intermission.

The Rams opened the second half with the football but their drive stalled at the North Allegheny 26-yard line. After a turnover on downs by Pine-Richland, the Tigers embarked on a 15-play, 74-yard marathon that concluded on a 12-yard touchdown run by fullback Sam Gelosh to tie the game at 7-7 with 1:47 left in the third quarter.

Pine-Richland’s next possession ended in a punt that was returned by Joey Porter Jr. to the NA 48-yard line. Junior tailback Percise Colon opened the drive with a 26-yard run and was tackled by his facemask for additional penalty yardage. After a 5-yard run by Gelosh, junior quarterback Ben Petschke scored on an 8-yard scamper to the end zone for a 14-7 lead with 10:57 remaining in the fourth quarter.

North Allegheny continued to impose its will on Pine-Richland in the fourth quarter and gained a strangle hold of the game when senior Ben Maenza broke loose for a 69-yard touchdown run and a 20-7 lead with 6:45 left to play. Maenza ended the night with 141 yards rushing on nine carries.

Down by 13 points and forced to throw, the Rams were bulldozed by the NA pass rush as Spencer was sacked five times on the night. Senior linebacker Cade Hoke led the charge with a team-high 10 tackles and two sacks on his way to Wright Automotive Player of the Game honors.

North Allegheny’s offense put the finishing touches on the victory with a 2-yard touchdown run by Petschke with 40 seconds remaining for a 27-7 triumph.

Pine-Richland’s lone source of offense was running back Luke Meckler who rushed for 114 yards on 28 carries. Mekler was forced to leave the game with an injury in the fourth quarter.

With the win, North Allegheny remains undefeated with a 10-0 record and clinches the No. 1 spot in the Class 6A playoffs with an 8-0 conference mark. Pine-Richland slips to 8-2 on the year and 7-1 in conference play. The Rams will be No. 2 seed, and like the Tigers, will have a quarterfinal round bye and a home game in the semifinals.