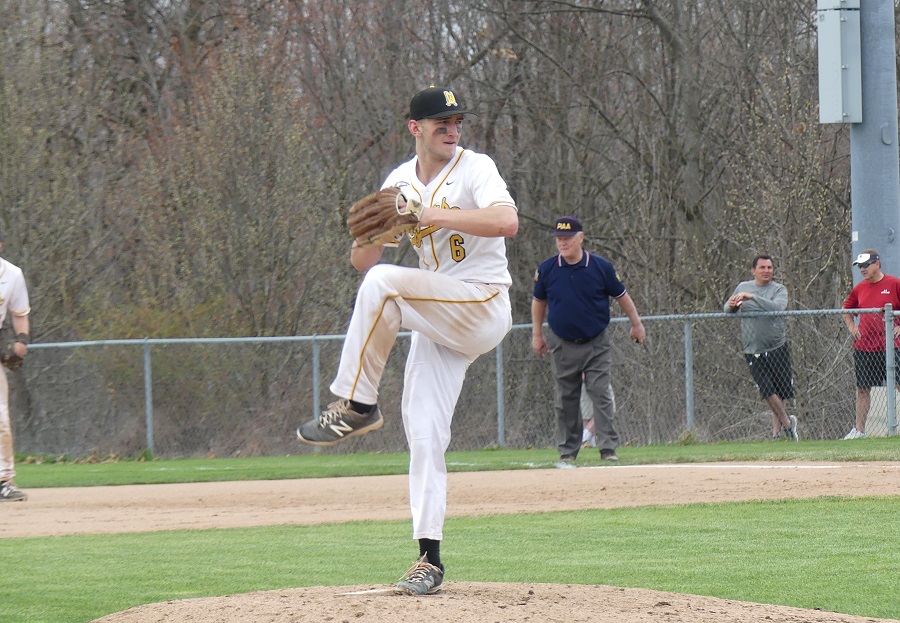 The North Allegheny baseball team dealt a crushing blow to the reigning WPIAL champion Pine-Richland Rams on Friday night with a 3-1 victory over its section rival. The win pulls the Tigers to within one game of first place while the Rams plummet to last place in Section 1-6A with a 1-4 record.

Coming off a 1-0 loss to Shaler in 10 innings on Wednesday, Pine-Richland snapped a 13-inning scoreless streak in the top of the first when Josh Johnson scored on a wild pitch to give the Rams a 1-0 lead. Despite the early run, the Rams’ scoring woes would continue with eight runners stranded on the night.

The Tigers lineup got heated up in the third when Ben Surman belted a one-out double and stole third base. An out later, Juliano Capretta rolled a ground ball through the left side of the infield for an RBI single that scored Surman and the game was tied, 1-1. Brett Laughner entered the game as a courtesy runner for Capretta and raced home on a fly ball by Caiden Wood that was dropped by Pine-Richland’s Johnson in centerfield and the Tigers led, 2-1.

In the bottom of the fourth inning, North Allegheny added on to its lead with an RBI single by Luke Trueman that scored Turner White for a 3-1 advantage.

Aside from the wild pitch in the first inning, North Allegheny starter Ben Petschke held Pine-Richland in check and limited the Rams to one run in 4.1 innings with five strikeouts and two walks. The Rams built a threat against Petschke in the fifth inning, however, which forced Tigers manager Andrew Heck to go to the bullpen. With runners at second and third and one out, sophomore reliever Kevin Schott retired two batters on two pitches to squash the uprising and kept NA’s 3-1 lead intact.

Trueman pitched the final two innings of relief with a 1-2-3 sixth inning and worked out of a jam in the seventh inning for his third save of the season. Down to their final out, the Rams again had runners at second and third with their most productive hitter, Matt Wood, at the plate. Trueman struck out the Penn State recruit to end the ballgame and secured a 3-1 win for North Allegheny. With one RBI on offense, and two scoreless innings and five strikeouts on the mound, Trueman was named the Wright Automotive Player of the Game.

Petschke earned the victory for the Tigers to improve to 1-0 on the season. Pine-Richland starter and Clarion University commit Bryce Grenet took the loss, allowing three runs to the Tigers in 4.1 innings on the bump.

With the win, North Allegheny vaults to 6-3 overall and 2-3 in Section 1-6A. The Tigers will host Shaler on Monday night in another section matchup.