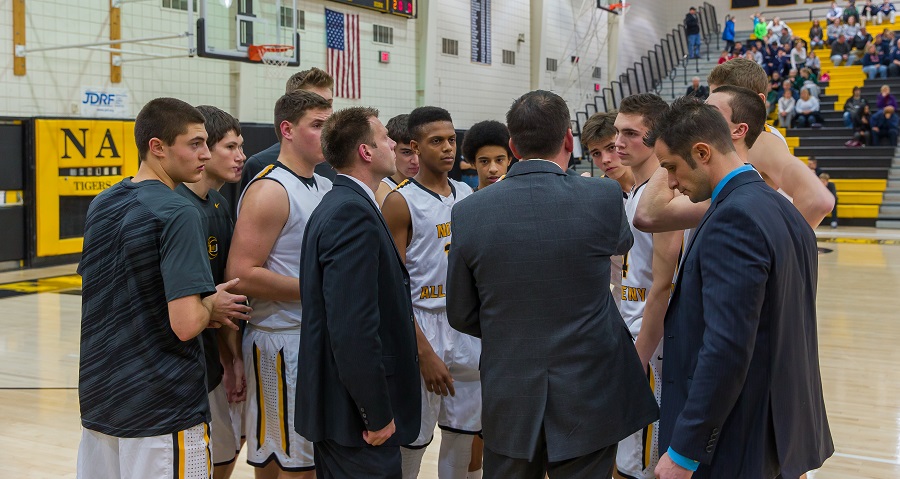 North Hills shocked the top-ranked North Allegheny Tigers on Tuesday night with superb shooting and solid defense for a 79-77 upset victory.  The win snapped a five-game losing streak to the Tigers with the Indians’ last win against NA also coming in upset fashion at home, 85-80, on January 17, 2012.

North Hills built a 39-31 lead by halftime on its home floor and held off the Tigers with near-perfect shooting in the second half.  The Indians shot 84 percent in the second half and finished with 64-percent shooting for the contest.  Additionally, North Hills was 8 of 13 from beyond the arc, hitting at a 62 percent clip.

The Tigers shot a formidable 44 percent in the game and put together a furious rally in the fourth quarter, pouring in 33 points in the period.  However, the rally came up two points short as North Allegheny dropped its first decision of the season.

Senior Cole Constantino scored a team-high 22 points for the Tigers, Griffin Sestili followed with 17 points, Keegan Phillips followed with 15 points and Will Sandherr chipped in with 13.  For North Hills, Kindahl Taylor scored a game-high 23 points, followed by Nick Sabolovic’s 21, Nick Smith’s 20 and Luke Chutko’s 13. Smith and Chutko were a combined 7 of 9 from 3-point range.

North Allegheny, which had been Quad-A’s last remaining unbeaten team, falls to 13-1 overall and 5-1 in Section 3-AAAA.  North Hills climbs back to .500 with the win, now sitting at 6-6 overall and 3-3 in section play. The Tigers look to bounce back with a Friday night visit to Shaler.  Tip-off is set for 7:30 pm.