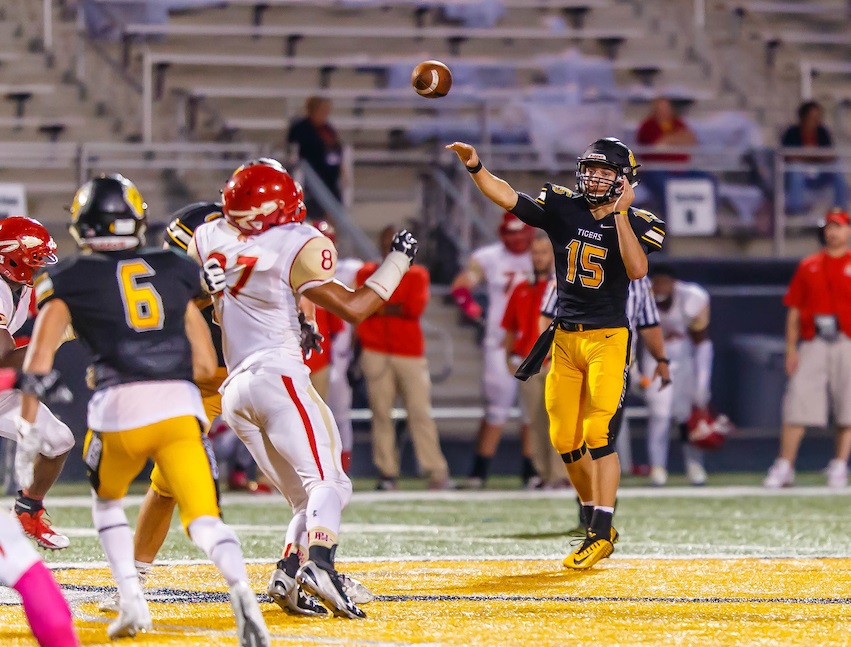 The North Allegheny offense posted 474 yards of total offense and special teams scored two touchdowns and blocked a punt as the Tigers who have already clinched a playoff berth were all over Hempfield from the opening kick.

The game started exactly how Coach Art Walker drew it up with the defense getting a 3-and-out and then on the Tigers first offensive play of the game Luke Trueman took a quarterback sweep to the left for 71 yards and the opening touchdown and two minutes in the game North Allegheny was up 7-0.

The next offensive drive North Allegheny went to their power running game and the drive ended with a Turner White 3-yard run to make the score 14-0.

Hempfield’s offense woke up the next possession putting an impressive drive together through the air finishing with Braden Brose catching a pass from Justin Sliwoski and scampering 52 yards to cut North Allegheny’s lead to 14-7 with 2:06 left in the 1st quarter.

Hempfield looked to get into their two minute offense but that was shut down quickly by the daunting Tigers defense when linebacker Alex Hays tipped and intercepted a Sliwoski pass and on the next play Trueman found Joey Porter Jr. on a 48 yard touchdown pass and in 40 seconds the North Allegheny lead was up to 28-7.

The half wasn’t over yet though as Hempfield drove down the field and with 10 seconds left in the half, on 4th down, Sliwoski threw a prayer to the end zone that landed in the hands of Brose for a 26 yard touchdown and at the half North Allegheny led 28-14.

Sliwoski and Brose connected once again this time from 13 yards out and on the ensuing kickoff this time it was Percise Colon’s turn to take the kick back 86 yards for another special teams touchdown for the Tigers giving them a 42-21 lead with 6:56 left in the 3rd quarter.

Varzdel was not done scoring as he caught a 31-yard pass from Trueman for six and the rout was on.

North Allegheny’s special teams came up big again when Trevor Tresser blocked a punt and set the Tigers up on the 14 yard line and the offense would not disappoint with Colon plunging in from 3 yards to make the score 56-21.

Brose and Sliwoski would connect one more time from 9 yards out and then Colon capped the scoring with a 28-yard run for his third touchdown of the night and a dominating night was over with the Tigers winning 63-28.

Luke Trueman was the Wright Automotive Player of the Game with 241 total yards and 4 total touchdowns. Turner White had 12 carries for 98 yards and a touchdown. Ethan Augustine and Dante Caputo paced the defense with six and a half and six tackles respectively.

North Allegheny improves to 7-2 while Hempfield drops to 1-7. The Tigers host Pine-Richland next Friday at Wright Field for senior night. Kickoff is at 7 pm.