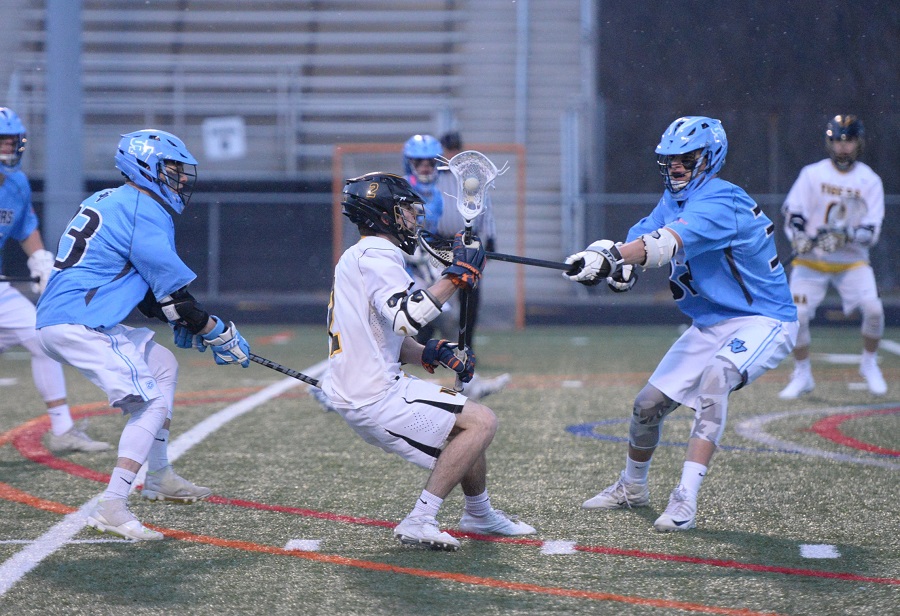 On a cold and blustery night at Newman Stadium, the North Allegheny boys’ lacrosse team used a flurry of goals to vanquish the Seneca Valley Raiders on Wednesday night, 9-1, in non-section play. Senior and Kenyon College commit Wes Powell paced the offense with three goals and an assist. For his efforts, Powell was named the Wright Automotive Player of the Game by the North Allegheny Sports Network.

North Allegheny opened up a 2-0 lead in the first quarter on goals by Ryan Leonard and Nick Kairys. Powell added a man-up goal with 4:39 to go in the second quarter to advance the lead to 3-0, Tigers. Seneca Valley scored its only goal of the night on a marker by Nicholas Salvatore with 2:02 remaining before halftime to cut the score to 3-1.

While the Raiders defense kept them within striking distance in the first half, North Allegheny’s persistent attack scored six unanswered goals in the second half to secure a comfortable non-section win for the Tigers. Junior Ben Maenza, senior Ian Young and junior Matt Osten all tallied goals in the second half. Powell tacked on two more goals for a hat trick and Leonard added another to finish with two goals on the night.

With the win, North Allegheny improves to 2-2 overall. Seneca Valley dips to 3-1 on the season. The Tigers will try for three victories in a row when they visit the Kiski School on Friday at 7:30 p.m.