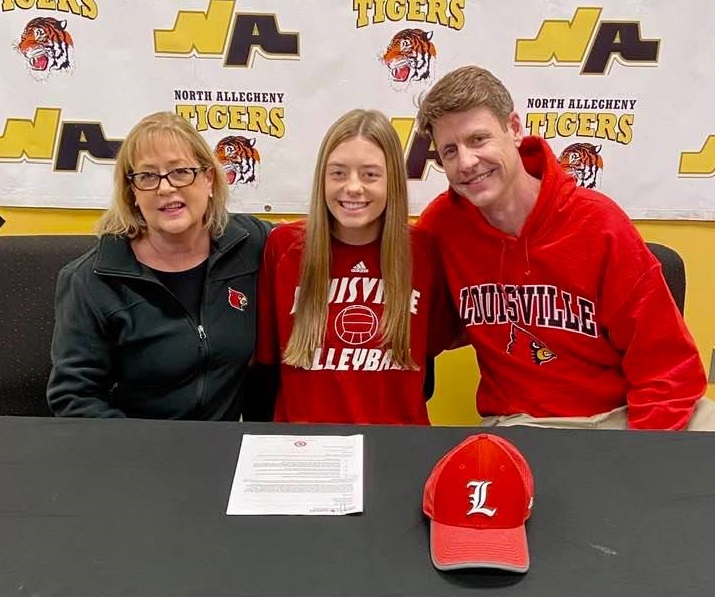 It was National Signing Day on Wednesday and North Allegheny senior setter Paige Morningstar signed her letter of intent to play college volleyball at the University of Louisville.

Earlier in the week, Morningstar earned first-team All-WPIAL honors for a third consecutive season. She was named first-team all-state by the Pennsylvania Volleyball Coaches Association the past two seasons and is well on her way toward a third.

During her four-year tenure on the team, the Tigers have amassed a staggering record of 85-1 and counting. Morningstar has played a vital role in three WPIAL championships and three PIAA crowns. The Tigers are vying for a fourth consecutive state title this season.

A talented multi-sport athlete, Morningstar was a starting forward on the 2020 WPIAL Class 6A champion North Allegheny girls’ basketball team. In the title game against Bethel Park, Morningstar delivered the game-clinching free throw with 5.9 seconds remaining in overtime to secure a 54-50 victory.

An athletic inside presence, Morningstar was second on the team in scoring and rebounding with 9.3 points and 5.7 boards per game. For her athleticism in both sports, Morningstar was tabbed as the Trib HSSN’s Girls Athlete of the Year last season.

Morningstar will major in Business at the University of Louisville. She is pictured above with her parents Darren and Kim Morningstar.