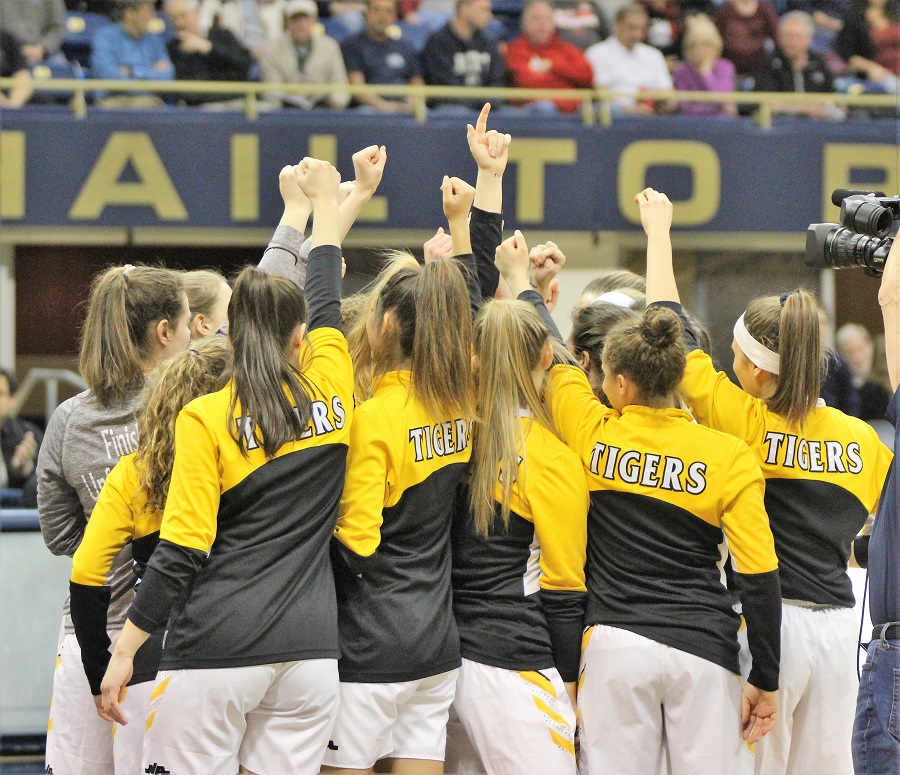 North Allegheny (28-0) continues its quest for a state championship tonight when the Tigers take on the Central Bucks South Titans (27-4) in the PIAA semifinals at Chambersburg High School. The Tigers are appearing in the PIAA’s final four for the third straight season and the fourth time in the last five years.

Tonight’s opponent, CB South, is making its first appearance in the PIAA semifinals. The Titans are in the midst of a banner season, with their 27 wins setting a new single-season record. The Titans are the runners-up from arguably the toughest district for girls basketball in the state, District 1.

Three of the final four teams remaining in Class 6A come from District 1. Souderton, the district champion, defeated CB South three times during the course of the season, including a 52-48 triple overtime thriller in the District 1 title game. Souderton takes on Upper Dublin tonight in the other Class 6A semifinal. Click here to view the Class 6A girls’ basketball bracket.

North Allegheny’s 28 wins this season matches the single-season program record for victories which was set last year with a 28-2 mark. Playing without their leading scorer, Rachel Martindale, since the WPIAL championship game, the Tigers have rolled off wins against Upper St. Clair (46-21), Altoona (55-50) and Bethel Park (44-34) in the state playoffs.

Senior Courtney Roman led the Tigers in Friday’s win over the Black Hawks with 11 points, including a crucial 3-pointer with 1:40 remaining in the game. Senior Piper Morningstar has also spearheaded North Allegheny’s run through the PIAA playoffs, pacing the team in scoring in the first two rounds with 18 and 21 points in the two games, respectively. Senior Madelyn Fischer has added strength in the paint as the team’s leading rebounder and freshman Lizzy Groetsch has provided clutch free throws to finish out the last two playoff victories.

After falling to Souderton in triple OT in the District 1 championship, CB South has collected wins over Cedar Cliff (43-40), Council Rock North (48-31) and William Allen (60-40) en route to the PIAA semifinals. The Titans jumped out to a 20-5 lead in the quarterfinal win over William Allen and were paced by senior Haley Meinel’s game-high 25 points.

Meinel is the all-time leading scorer at CB South, surpassing the old mark of 1,048 points during the Titans’ PIAA opening round win over Cedar Cliff. The senior guard will play basketball next season at Division II Jefferson University, formerly known as Philadelphia University.

Another top player to watch out for tonight for the Titans is junior guard Alexa Brodie. Averaging 12.5 points per game, Brodie is an excellent shooter with great skills on defense as well. One of 133 players to be selected to the U-16 National Team, Brodie is receiving Division I interest.

Senior guard Lindsey Scott is the team’s sixth-man and a spark player off the bench who typically defends the opposing team’s best ballhandler. Scott is an outstanding soccer player at CB South and will play soccer collegiately at Division II Muhlenberg University.

Senior swing player Mackenzie Ehresman is another dual sport athlete who will play soccer in college. Ehresman will attend D-I St. Joseph’s University in the Atlantic 10 Conference. Both Scott and Ehresman led the CB South girls’ soccer team to the PIAA Class AAAA championship game in 2016 before falling to Canon-McMillan in the title game, 1-0, in overtime.

CB South is coached by Beth Mattern who is in her 11th year leading the Titans.

Tonight’s PIAA Class 6A semifinal between North Allegheny and Central Bucks South will tip off at 7:30 p.m. from Chambersburg High School. The contest will be broadcast live via the internet on the North Allegheny Sports Network. You can listen to the game by clicking here.