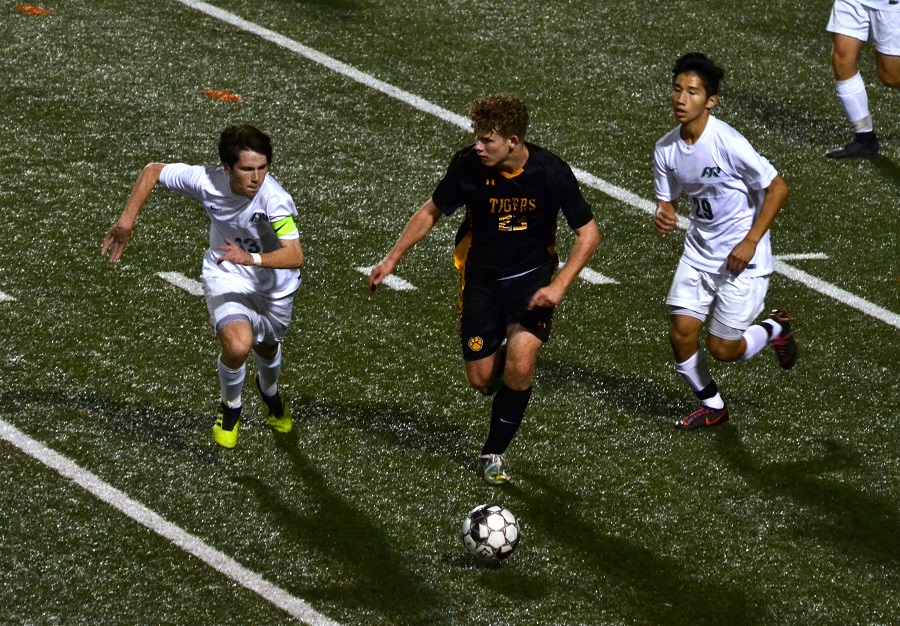 Pine-Richland scored two goals in the first half and survived a furious rally by North Allegheny in the second half for a 2-1 section win over the Tigers at Newman Stadium on Thursday night. Despite the loss, the Tigers still have a chance to lock up a playoff berth in the season finale on Monday against Butler. Whoever wins that contest will punch their ticket to the postseason and the loser will be eliminated. A tie would place both teams in the playoffs, along with Fox Chapel. The Foxes will qualify regardless of Monday’s outcome.

In the first ten minutes of the game, the Tigers had a pair of long-distance scoring chances by Kyle Kaczmarek and Nick Bridges but neither attempt tickled the back of the Pine-Richland net. Kaczmarek’s shot at 34:30 of the half missed high over crossbar and Bridges’ line-drive kick was saved by Rams goalie Tom Fest.

With 24:23 to play in the first half, Pine-Richland sophomore Evan Dyni accepted a throw in and sent a centering pass in front of the NA net. The ball was initially headed out by the Tigers but Rams senior Brian McCarthy settled the ball and drove a kick from 20 yard out into the NA net for a 1-0 lead.

The Tigers nearly tied the game with 10:30 to go in the half but a kick from Bridges near the top of the 18 was denied on a leaping save by Fest to keep the Rams ahead, 1-0.

The Rams managed to add on to their lead with just over four minutes to play in the half when senior Caleb Kim’s throw-in landed on the door step and senior Niko Marsh headed the ball into the goal for a 2-0 PR advantage.

In the second half, the Tigers offense found its rhythm and picked up an important goal to swing the pendulum in NA’s direction. On a throw-in with 22:36 to play in regulation, Luke Anderson headed a ball in front that was buried into the PR net by Jonathan Ross to trim the score to 2-1, Rams. A constant spark throughout the night, Ross was named the Wright Automotive Player of the Game.

With a bit more spring in their step, the Tigers continued to pressure and almost found the equalizer on a free-kick by Niko Hindsbo from 20 yards out that was driven toward the net. The Tigers couldn’t get a clean shot off, however, and the Rams one-goal lead remained intact. Another Hindsbo free kick led to a scoring chance four minutes later as Sam Giannetti put a shot on net but Fest made the save.

Despite a feverish pace down the stretch, Fest and the Pine-Richland defense staved off North Allegheny and held on for the 2-1 victory.

With the loss, North Allegheny falls to 10-5 overall and 8-5 in Section 1-AAAA. Playoff-bound Pine-Richland improves to 10-3-3 on the season and 9-2-3 in the section. The Tigers will host Butler on Monday night in a crucial game with a playoff berth at stake. The game will be broadcast live via the internet on the North Allegheny Sports Network.