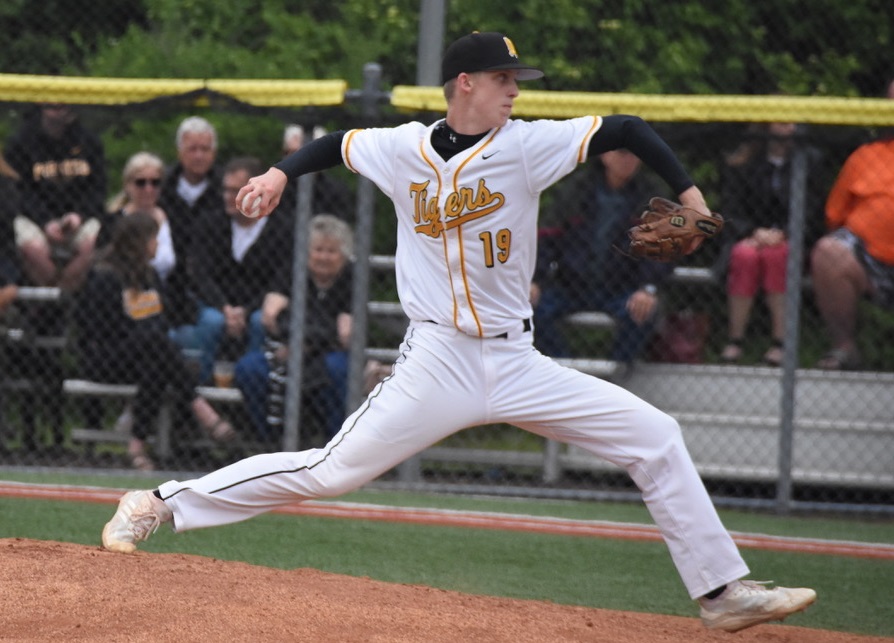 On the strength of a three-run fifth inning, the North Allegheny Tigers prevailed over the Butler Golden Tornado in the WPIAL Class 6A quarterfinals on Tuesday afternoon at Fox Chapel High School. NA starting pitcher Anthony Hattrup (5-1) earned his fifth victory of the season with a complete-game effort. The Dayton University commit allowed only one run and struck out seven batters, earning Wright Automotive Player of the Game honors.

North Allegheny took an early 1-0 lead in the bottom of the first inning when Cole Young laced a frozen rope to left-centerfield that was misplayed by the Butler outfield, scoring Logan Andreyko from second base.

Butler answered back in the top of the second and started an uprising with a two-out double by Zachary Slomers. After Slomers stole third base, he scored moments later courtesy of an infield RBI single by Cooper Baxter to even the score at 1-1. The Butler run snapped the scoreless streak for the NA pitching staff at 26 consecutive innings.

The game remained tied until the Tigers took the lead for good in the fifth inning. Butler starter Colby Anderson sputtered through the first four innings with three walks and three hit batsmen but managed to allow only one run in that span.  The fifth inning did not go quite as well for the Butler lefty. With one out in the frame, Andreyko singled and Jared Orwell followed with an RBI double to give North Allegheny a 2-1 lead. After Anderson hit Young with a pitch, his fourth hit batsmen of the game, a balk by Anderson advanced runners to second and third. Junior Ryan Dougherty capitalized with a two-run single to improve the NA lead to 4-1. Anderson (3-3) went 4.1 innings and took the loss, allowing four runs on three hits.

Similar to Anderson, Hattrup was erratic early on with two walks and one hit batsman in the first three innings. However, the NA right-hander found his rhythm in the middle innings by retiring the next 12 straight hitters. An infield single by Mattix Clement broke that string with one out in the top of the seventh. Slomers bounced into a fielder’s choice on a great play by Young at shortstop, retiring Clement at second base for the second out of the seventh. Down to their final out, Butler started a rally with a Baxter walk and an RBI single by Kyle Weitzel to trim the NA lead to 4-2. With the game-tying run aboard, Hattrup buckled down and induced a weak groundout off the bat of Anderson to end the ballgame.

North Allegheny advances to the WPIAL semifinals for the third straight season and will take on the top-seeded Penn-Trafford Warriors. The game will be broadcast live via the internet by the North Allegheny Sports Network.

The Tigers improve to 16-5 on the season with their ninth straight win. The 12th-seeded Golden Tornado finishes the year with a 7-14 record.