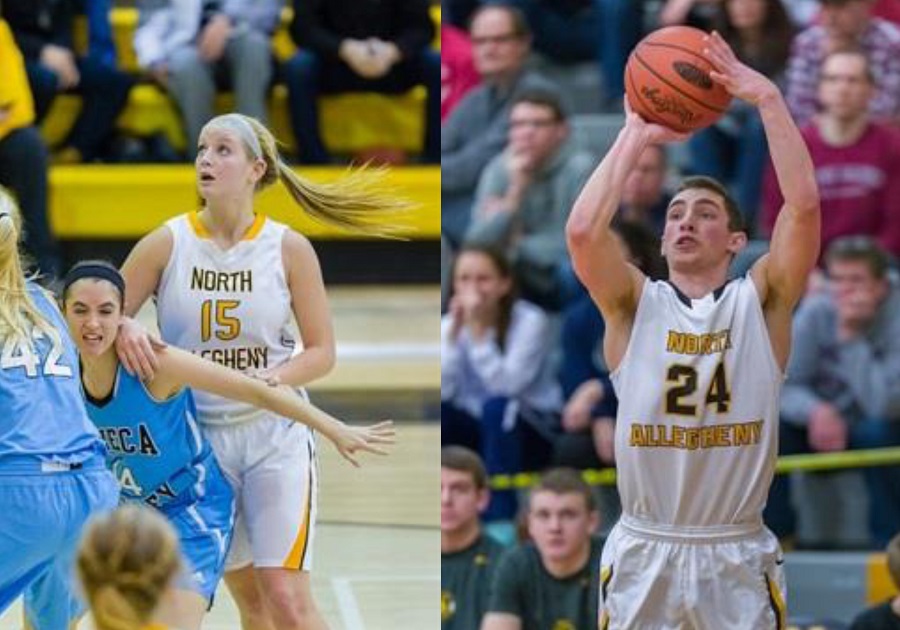 The post-season awards for some of North Allegheny’s basketball players have begun rolling in.  The leading scorer for the NA boys’ basketball team, senior Cole Constantino was named to the WPIAL Class AAAA All-Section 3 First Team. Constantino averaged 23.4 points per game and led the team in rebounding by grabbing 5.1 boards per contest.  Additionally, Constantino has been chosen to play in the annual Pittsburgh Roundball Classic next month at Geneva College. For a look at the entire Roundball Classic roster, click here.

Fischer was the Tigers point guard and led the team in assists (79) and steals (62). Sandherr and Phillips were two of NA’s sharpshooters from the outside, pouring 49 and 50 treys, respectively.  Sandherr hit for a 35 percent clip from beyond arc and averaged 12.3 points per game.  Phillips poured in outside shots at a 39 percent success rate and averaged 9.6 points per game.  The 6-6 Lake was a stalwart in the middle, blocking a team-high 33 shots and collected 4.2 rebounds per contest.

For the Lady Tigers, juniors Abby Gonzales and Taylor Lake were named to the Class AAAA All-Section 3 First Team.  It was the second straight year Gonzales was selected to the first team squad and the first time Lake was chosen. Gonzales, who averaged 11.6 points per game, led the team in assists and steals with 129 and 88, respectively.  Lake was the Lady Tigers leading scorer and rebounder with 12.8 points per game and 7.3 rebounds per game.

Seniors Devvin LaBarge and Meg Morningstar received All-Section Honorable Mention laurels. LaBarge was the Tigers top 3-point shooter with 45 treys, hitting 35 percent from beyond the arc.  Morningstar, who’s headed to the University of Notre Dame to play volleyball, collected a team-best 36 blocks.  Like Cole Constantino and Will Sandherr of the NA boys’ basketball team, LaBarge and Morningstar will play at the annual Pittsburgh Roundball Classic at Geneva College next month.