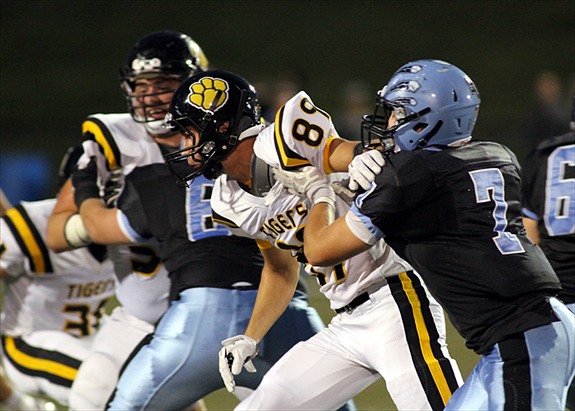 Uncharacteristically, North Allegheny committed six turnovers in the game with four of which coming in the first half. The turnovers led to constant good field position for the Raiders, which Seneca Valley eventually took advantage of late in the first half. The NA defense stood tall intercepting SV quarterback T.J. Holl twice in the first quarter, but with 5:01 on the clock the Raiders began an eight play drive at the NA 36-yard line that was capped on a 24-yard touchdown pass by Holl to Eric Mrkonja for a 6-0 lead. The Raiders failed on a two-point conversion attempt following the score.

The score remained 6-0 until the Tigers committed their fourth turnover of the half at their own 45-yard line with 3:21 to go in the second quarter. Again using a short field, the Raiders cashed in on a five-play drive with a 5-yard rushing touchdown by Mason Dehart for a 13-0 lead with 1:57 remaining before halftime.

Despite outgaining Seneca Valley 266-224 in the game, the Tigers couldn’t trim the deficit in the second half. North Allegheny drove the ball to the Raiders 21-yard line late in the third quarter but turned the ball over on downs, and was turned away again midway through the fourth quarter on a Cody Boozel interception. The Raiders punctuated the upset win with a 10-yard reverse touchdown pass on fourth down with 1:16 to play from receiver Brad Hensler to quarterback T.J. Holl for a 20-0 lead. Holl accounted for 200 yards of total offense, including 104 yards on the ground.

North Allegheny scored on the game’s final play on a 34-yard jump ball pass reception that was tipped into the arms of Sean Idowu on a pass from quarterback Jeff Clemens to bring the final score to 20-6. Clemens passed for 108 yards and rushed for 100 on the night.

While the outcome went to the Raiders, the North Allegheny defense did their best to keep the Tigers in the game. NA forced three turnovers, including two interceptions by senior defensive back Elijah Zeise. Zech Nachazel recovered a muffed punt return by Seneca’s Mrkonja early in the third quarter. Linebacker Layne Skundrich was the Tigers leading tackler on the night with 15 stops and was named the Wright Automotive Player of the Game.

North Allegheny falls to 2-1 overall and 1-1 in the Northern Eight Conference. Seneca Valley improves to 3-0 overall and 3-0 atop the conference standings. The Tigers hope to bounce back next week with a home meeting against conference foe Pine-Richland. The Raiders will play out of conference next Friday night with a visit to Connellsville.