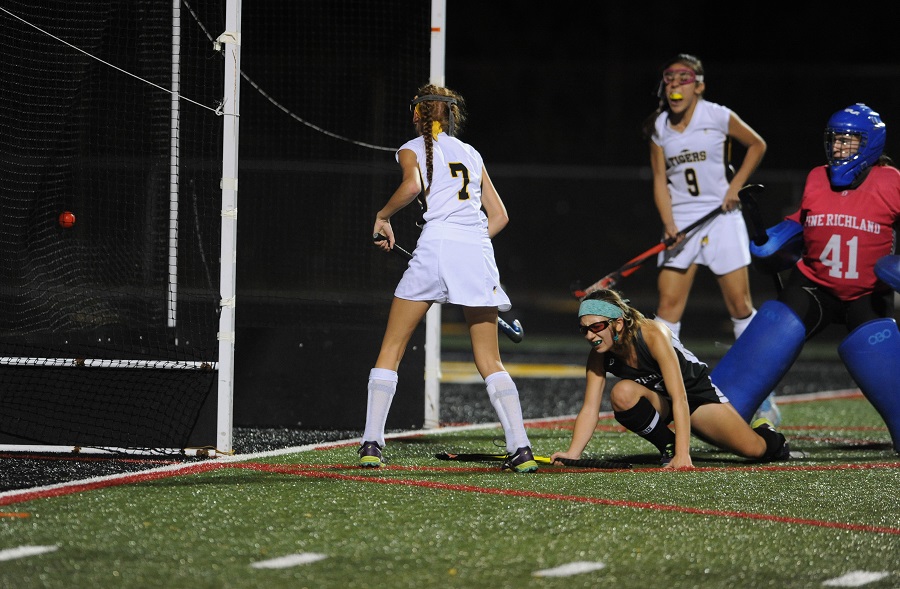 Senior Livy DeFoggia scored 24 seconds into overtime to lift Pine-Richland to a 4-3 victory over North Allegheny on Tuesday night at Newman Stadium. The win spoiled a last-minute rally by the Tigers in the second half and secured an outright section title for Pine-Richland. It’s the first time a team other than North Allegheny has won the Section 1 crown outright since 2008. That year the Norwin Knights edged out the Tigers by one game in the standings with an 8-2 record.

North Allegheny entered the night hoping to atone for a 3-0 loss to Pine-Richland on September 28 and gave a determined effort. However, it was the Rams who struck first with a goal by Alora Sharron with 22:50 on the first half clock for a 1-0 lead. The Tigers nearly tied the game with a flurry of shots moments later as Brooke Cameron drove a shot hard into the circle that was saved by Rams goalie Kierston Coup. The rebound kicked to Erin Coran but Coup again made the save to deny the Tigers. A third rebound try was aimed at the net by Coran but defensive back Chalinda Schleicher steered the ball away from the net to keep PR on top, 1-0.

Pine-Richland added on to its lead with 7:36 to play in the half on a goal by Jackie Shepard to make it 2-0, Rams. North Allegheny continued to press the Rams and garnered a bevy of penalty corner opportunities on the night. The Tigers held an advantage on penalty corners, 13-1, over the Rams. It appeared North Allegheny had scored on a penalty corner with 28 seconds left in the first half when Cameron one-timed a pass from Bridget Russell into the PR net. However, the goal was waved off because the shot was more than 460 mm high (the height of the backboard) and did not count, keeping the Pine-Richland lead intact at the half at 2-0.

In the second half, North Allegheny continued its offensive attack but again had a goal waved off with under 24 minutes left in the game. Cameron sent a ball from outside the circle in front of the net that appeared to be deflected in by Coran. The officials did not see the deflection and ruled the goal illegal. Undaunted, the Tigers received a penalty corner less than four minutes later and scored on a Coran goal to trim the score to 2-1, Pine-Richland.

The Rams regained momentum with a goal by Brenna Flynn with 9:23 remaining to bring the score to 3-1. North Allegheny head coach Madelyn Berkley called a timeout following the Flynn goal and the Lady Tigers responded by staging an exciting rally. The Tigers trimmed the score to 3-2, Rams, with a goal by junior Olivia Scherrer with 3:39 to play. In the waning seconds, North Allegheny tied the game at 3-3 thanks to a marker by sophomore Angie Genter with 55 ticks on the clock (seen in photo above.) For her efforts, Genter was named the Wright Automotive Player of the Game.

While the late rally gave North Allegheny momentum heading into the 15-minute overtime period, Pine-Richland stayed cool under the pressure and gained the win in the most sudden of victories. After the opening draw of overtime, Molly Rottinghaus stormed into NA territory and passed to Sarah Metzmaier who uncorked a shot that struck the right post and deflected in front of the net. That’s when DeFoggia buried the rebound to lift Pine-Richland to the win and section title.

North Allegheny slips to 7-9-1 overall and 7-2 in Section 1-AAA. Pine-Richland secures the section crown with a 9-0 mark. The Lady Tigers conclude the regular season on Wednesday night against the Hempfield Spartans at 7:30 p.m.