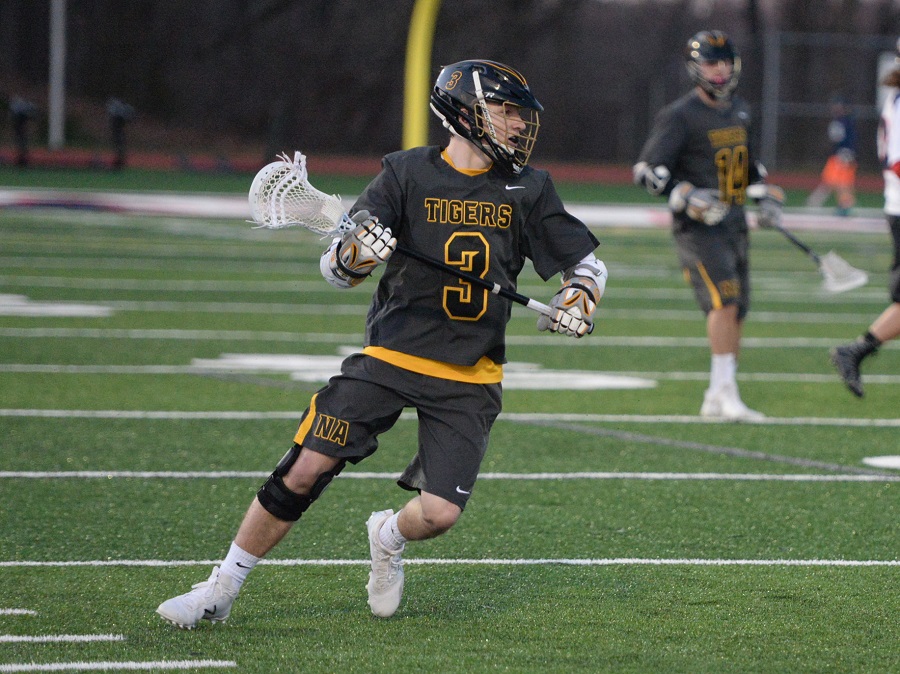 Behind an eight-goal performance from sophomore Dane Dowiak, the Pine-Richland Rams topped the North Allegheny boys’ lacrosse team on Tuesday night, 11-7, in non-section action. Dowiak’s eight goals tied the Pine-Richland record for most goals in a single game, matching the previous mark of Brian Newcamp who netted eight in a contest in 2015.

Pine-Richland cashed in on two man-up opportunities in the first quarter to help construct a 4-1 lead. Senior Wes Powell scored North Allegheny’s only goal in the opening stanza with a man-up marker of his own.

North Allegheny struck quickly in the second period on goals from Nick Kairys and Ian Young to trim the deficit to 4-3 with 10:18 left in the first half. The Rams responded  with goals from Ben Barnes and Dowiak for a 6-3 advantage. With 3:54 remaining, NA junior Matt Osten scored to cut the Rams lead to 6-4 at the half.

The Tigers used their team speed to spark the offense early in the second half and Ryan Leonard tallied back-to-back goals to knot the contest at 6-6 with 9:36 remaining in the third quarter. Leonard’s two goals game within a 23 second span.

Despite NA’s best efforts, Pine-Richland scored four of the final five goals to claim an 11-7 victory.

While the outcome favored the Rams, the Tigers did have plenty to build from the season’s second game of the year. Senior faceoff midfielder Alex Hays put forth a solid effort and won numerous draws against Pine-Richland’s Jake Freedlander, a University of Detroit Mercy commit. Hays was aided by long-stick midfielder Zach Chick and midfielders Ben Maenza and Osten on the wings.

Helping spark the Tigers offensively was Kairys with two goals on the night, including NA’s final tally in the fourth quarter. For his efforts, Kairys was named the Wright Automotive Player of the Game by the North Allegheny Sports Network.

With the loss, North Allegheny slips to 0-2 on the season. Pine-Richland improves to 2-0. The Tigers look to bounce back on Thursday night with a home date against the Upper St. Clair Panthers in non-section play at 7:30 p.m. The game will be broadcast live via the internet on the North Allegheny Sports Network.