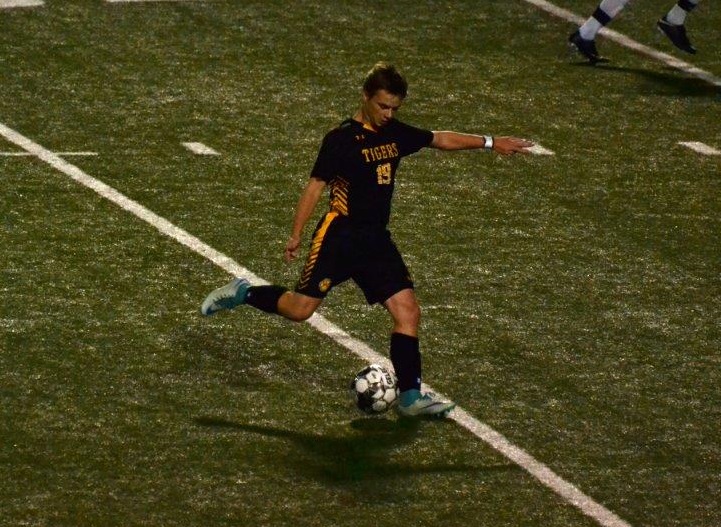 On a cool early fall evening, the North Allegheny Boys Soccer team capped off a remarkable day of soccer at Newman Stadium with a hard fought 1-0 win over non-section foe, the Penn-Trafford Warriors. The day was a celebration of NA soccer, it included: Four NA home games by both the boys and girls JV and Varsity teams and SoccerFest, the annual initiative to benefit Ambassadors Football Club.

Coach Bobby Vosmaer used the non-section match-up to show off his depth and changed his starting line-up to feature Grant Baierl, Samuel Giannetti, Drew Hunker, Ryan Schwartz, Jason Roman, Andrew Solman, Saif Ali, Luke Anderson, Bryce Burroughs, Michael Mitole and Sam Maldia. As the first half wore on, neither team had a clear advantage. The back-and-forth affair saw a few decent scoring opportunities by both teams. The Tigers best opportunity came with 23 minutes left in the half when Anderson took a pass at midfield, broke free and worked the ball to just outside of the penalty box where the Warrior defense was forced to the foul. The ensuing free kick from just outside the 18 was low and ultimately push away, ending the half with a scoreless tie.

The second half featured the same starting line-up and the pace of play was similar, in that neither team could establish a clear advantage. Six minutes into the second half, Coach Vosmaer made a wholesale substitution and inserted Nikolaj Hindsbo, Brennan Donovan, Sam Wilson, Will Cinker, Jack Walsh, JD Runatz, Justin Mericle, Austin Smith and Nick Bridges. The change did not pay immediate dividends, as it appeared to take the new line-up time to get into the flow of the game, during which Penn-Trafford controlled the pace. As the half wore on, the momentum clearly shifted to the Tigers favor and they began to control the game. Each Penn-Trafford attack was quickly pushed away by a staunch back line and the ensuing counter attack, put pressure on Penn-Trafford’s goal keeper, Logan Kruetzberger. The Warrior defense and Kruetzberger were able to keep NA off the board despite numerous scoring chances generated by Cinker, Runatz and Bridges.

It appeared that the game was going to end in a scoreless draw, when North Allegheny finally broke through with one minute left. With time winding down, Runatz worked the ball to the right side and at roughly the ’25, he cross the ball into the box, where a host of Tigers were waiting. Wilson was able to get a head on the ball and redirect it off the left post and into the back of the net.

The shutout victory, their sixth of the season, moves the Tigers overall record to 9-3, the section record remains at 7-3. The Tigers led in shots on goal 8-6 and corner kicks 3-2. North Allegheny returns to section action this Tuesday, October 2nd at 7:30, when they host Butler. The game can be heard on the NA Sports Network.