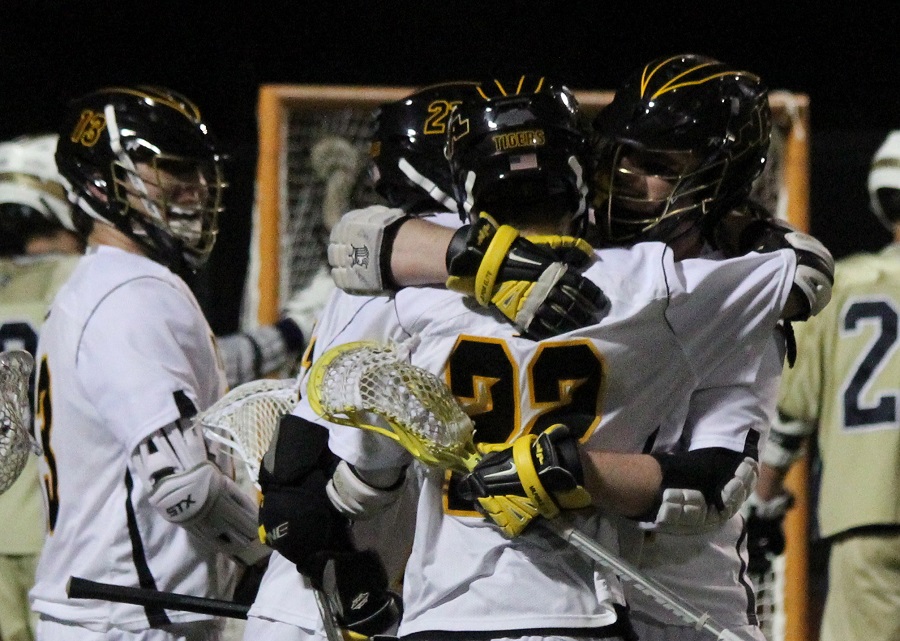 Behind the strength of a five-goal second quarter, North Allegheny topped Sewickley Academy on Monday night by a 9-7 decision at Newman Stadium. Junior Gavin Hagen helped pace the offense with a hat trick and an assist in the non-section win. Sophomore Wes Powell added two goals and three tremendous assists.

The Tigers fell behind 3-0 in the first quarter but scored six of the next seven goals to take a 6-4 lead into halftime. Junior defenseman Greg Ferringer sparked North Allegheny’s comeback with a blistering goal with seven seconds remaining in the first quarter. Ferringer, who helped shut down SA’s top scoring threat, Ben Mulholland, collected eight forced errors and four ground balls.

Even though Sewickley Academy scored the first goal in the second quarter to take a 4-1 lead, North Allegheny stormed back to grab a 6-4 lead with a barrage of goals. Hagen scored twice in the period, along with goals from Powell, Ben Maenza and Alec Vissotski. Making his return to action, Vissotski won 12 of 18 faceoffs and reeled in nine ground balls to allow NA to dictate the pace of the game. Trevor Perry chipped in with six ground balls and two forced errors.

The Tigers continue to pepper the Sewickley Academy net and scored three more times in the third period for a 9-5 advantage. Powell, Hagen and Dillon Dugan tallied markers in the third to give North Allegheny an insurmountable lead.

With the win, North Allegheny improves to 8-6 overall. Sewickley Academy dips to 3-9 on the season. The Tigers will participate in the MSCLA Tournament this weekend before a showdown with Pine-Richland next week.