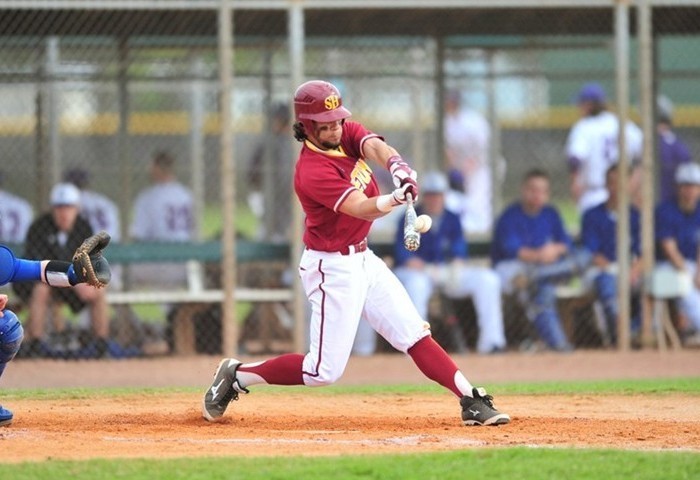 Senior third baseman Nick Sell has earned another prestigious honor as he was just named to USA Baseball’s 30-player USA Baseball Golden Spikes Award watch list.  Nick is the only Division II player on the list.  The list was revealed on Thursday afternoon, recognizing potential candidates for the top amateur baseball player in the country.  Sponsored by Major League Baseball, and presented in partnership with the Rod Dedeaux Foundation, the Golden Spikes Award will be presented for the 38th time on Tuesday, June 23, in Los Angeles.  The complete list can be found here.

During his sophomore season, Sell was named to USA Baseball’s 60-man Preseason Golden Spikes Award Watch List.  He was a a three time All American that season, earning first team honors from the ABCA and NCBWA and was a second team selection by Daktronics.  Sell was also named the NCBWA Atlantic Region Player of the Year.  Nick was the WVIAC Hitter and Player of the Year as well as being a first team All WVIAC selection.  He also finished fourth in the Tino Martinez Award voting in 2013.

The watch list will continue to be a “rolling” list until May 22 — when the semifinalists for the award are announced — ensuring that athletes can play themselves into consideration for the award.  Nine players have played themselves onto the watch list since the 60-player midseason iteration that was released on April 9. The nine athletes join 21 other candidates that were recognized on the midseason update. The Southeastern Conference led the way with seven athletes, while the Atlantic Coast Conference and the Pac-12 Conference each had four athletes on the watch list. In total, 12 NCAA Division I conferences have at least one athlete represented, as well as two NJCAA conferences and one NCAA Division II conference.  Louisiana State leads all institutions with three athletes on the watch list, while the University of Arizona and defending NCAA Division I national champion, Vanderbilt, each have a pair of representatives. Fourteen athletes are pitchers, 13 athletes are position players and three of the players are two-way athletes.

On May 22, USA Baseball will announce the semifinalists for the 2015 Golden Spikes Award. The semifinalists list will be sent to a voting body consisting of past USA Baseball National Team coaches and press officers, members of the media that follow the amateur game closely, select professional baseball personnel, current USA Baseball staff and the 37 previous winners of the award, representing a group of more than 200 voters.   Fan voting will once again be a part of the Golden Spikes Award in 2015. Friday, May 22, marks the day when amateur baseball fans across the country will be able to vote for their favorite semifinalists at GoldenSpikesAward.com. As part of this selection process, all voters will be asked to choose three players from the list. On Tuesday, June 2, USA Baseball will announce the finalists, and voting will once again commence that same day.

The 2015 Golden Spikes Award winner will be named on Tuesday, June 23, at a presentation in Los Angeles. The finalists and their families will be honored at the Rod Dedeaux Foundation Dinner that evening at the Jonathan Club in downtown Los Angeles.

GoldenSpikesAward.com – created in 2008 and powered by MLB Advanced Media — is the online home for the award.  The website features content devoted exclusively to the GSA, including news, the weekly Golden Spikes Award spotlight, voting history and past winner photo galleries.