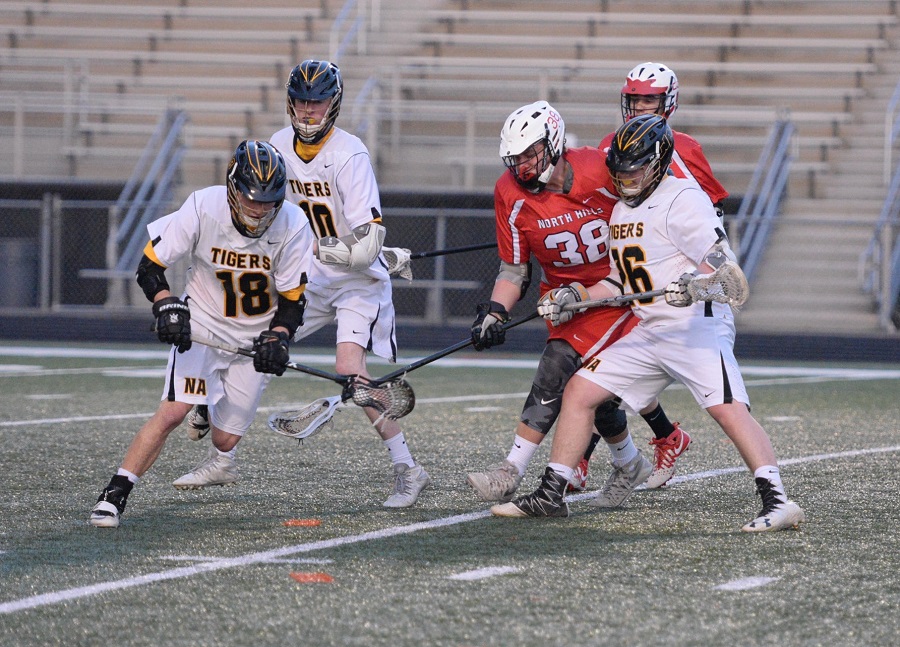 Senior Night Dominance By NA In Win Over North Hills, 16-1

The night began with a stirring rendition of the Star Spangled Banner by senior Franco Bochicchio and from that point on the evening belonged to the North Allegheny in a lopsided 16-1 victory over the North Hills Indians on senior night. All 17 seniors saw action and nine of them scored goals, including Brian Kress who netted the first varsity goal in his career.  All of the Tiger seniors were named the Wright Automotive Players of the Game by the North Allegheny Sports Network. The victory also locked up an outright section crown for the Tigers.

Gavin Hagen, Alec Vissotski, Dillon Duggan, Ryan Leonard and Isaiah Davis all tallied two goals apiece in the Tigers onslaught of North Hills. Other NA goal scorers included Anthony Mauro, Cameron Sunseri, Trevor Saundry, Mason Mickey and Peter Barrante. In net, senior goalie Ean Kuska was rarely tested and earned an easy victory. Senior defenseman Greg Ferringer made his return to action after missing a few games due to injury and fellow long-stick defenseman Jack Kairys logged some minutes on offense with a short stick in hand. Senior starting defenseman Jeremy Osten also got the crowd fired up with his first work on offense with a short stick and narrowly missed a goal on a couple of shots.

With the win, North Allegheny finishes as the Section 3-AAA champions with an unblemished 6-0 record. The Tigers also improve to 12-3 overall and will host Peters Township on Thursday night in a tough non-section game. North Hills ends its season with a record of 3-13 overall and 0-6 in the section.